Lush forests, mountains, and tea plantations cover Sri Lanka’s landscape. The island country known as “the pearl of the Indian Ocean” has many residents who struggle with poverty and malnutrition. Compassion-supported children experience these realities daily. But at the Compassion project, there is hope.

This video was released in July 2022.
If you've been inspired to sponsor a child from Sri-Lanka, visit our sponsorship page.

Protection over Compassion staff who travel to high-risk areas

The health and wellbeing of sponsored children and their families

In most cultures, a nod means yes and shaking your head means no. That's not the case in Sri Lanka. When meaning yes, people of the island nation actually shake their head from side to side.

Sponsor a child in Sri Lanka

Percentage of children under the age of 5 underweight: 20.5%

Religion: Approximately 70% of the population are Buddhists, 13% are Hindus, 10% are Muslims and 7% are Christians.

Over the years the Portuguese, Dutch and British have all staked a claim on the island, originally known as Ceylon. Early history charts the rise and fall of several dynasties and the growth of international trade on the island.

Around the 14th century, when the Pandya dynasty in South India collapsed and many Tamils migrated to the north and east of Sri Lanka, and Sinhalese people drifted to the southwest of the country.

Between 1500 and 1800, Sri Lanka saw the arrival of the Portuguese, the Dutch and eventually the British. The settlers exploited the island’s rich resources including cinnamon, freshwater pearls, coconut oil, spices, and even elephants. The British even began bringing Tamil labourers from southern India to work in the tea plantations in the hill area.

The island had gained full independence by 1948, but conflict between the majority Sinhalese and the minority Tamil began to grow. In 1972 Ceylon became a republic and changed its name to Sri Lanka, which means ‘resplendent island’.

Peace negotiations repeatedly failed until 2009 when government troops captured the northern town of Kilinochchi, and the Tamil Tigers surrendered. The island of Sri Lanka was devastated by a tsunami on Boxing Day in 2004, which killed more than 30,000 Sri Lankans and destroyed whole coastal communities.

Art
Sri Lankan painting, sculpture and architecture have been greatly influenced by Buddhism. Nature is a recurring theme through many Sri Lankan art, as seen in the many temple paintings and carvings representing images of birds, elephants, wild animals, trees, and flowers.

Music
Elements of Buddhism, European colonisation (particularly Portuguese), and Indian culture can all be heard in Sri Lankan music. In both Buddhist and Hindu temples across the country, you can still hear the hypnotic beat of the Kandyan drums - a style of music that takes its name from the town of Kandy in central Sri Lanka, where there is a famous Buddhist temple. When the Portuguese first arrived on the island, they brought their ukuleles and guitars. There is also kaffrinha, a genre of music, song and dance introduced to the island during its colonial period by those brought in from Africa as slaves. The African people brought to the island also introduced a form of dance known as baila. Regional folk music is sung across the country as a form of cultural expression by different groups. Today, much of Sri Lanka's modern music is influenced by the Bollywood culture in India.

Sports and Games
Volleyball has long been a favourite sport on the island. However, the national pastime is either watching or playing cricket. Cricket fields are scattered across the island, and when big matches are televised, it's not unusual for businesses to close. In 1996, for example, the whole country shut down when the Sri Lankan team beat Australia in the finals to win the Cricket World Cup.

Typical Foods
Rice is the main staple in Sri Lankan cuisine. Flavourful curries are used to make a wide variety of rice dishes ranging from meat or fish-based dishes to vegetables and even fruit. Along with the main curry dish, a typical Sri Lankan meal includes side dishes such as chutneys, pickles, and sambals, which can be extremely spicy. Coconut sambal is the most famous and is made from ground coconut, chillies, dried Maldivian fish and lime juice. These ingredients are ground to a paste and eaten with rice. Along with rice and various curries, coconut milk is a common ingredient in Sri Lankan cuisine and gives it its unique flavour. Mallung is another popular dish made of chopped leaves, grated coconut and red onions.

Since the country gained independence in 1948, the government in Sri Lanka has made education one of its highest priorities.

Primary enrolment for both boys and girls is well over 90%, with higher enrolment for boys and a strong emphasis on secondary education. This high enrolment rate has been possible due to a well-developed network of public schools and, when it comes to academic education, Sri Lanka is one of the best-performing countries in South Asia.

There are pockets of low literacy in the country, particularly in families who work in the tea estates in the centre of the country and those in the former conflict-affected areas in the north and east. There is also limited support for children with disabilities and those who struggle with learning in a classroom environment.

Approximately 70% of the population are Buddhists, 13% are Hindus, 10% are Muslims, and 7% are Christians.

Although not a state religion as such, the constitution gives Buddhism the "foremost place", and the government is committed to protecting it. The law recognises four religions: Buddhism, Islam, Hinduism, and Christianity. The rights of these groups and other minority religious groups are protected, so they can practice their beliefs freely.

New religious groups, including groups affiliated with the four recognised religions, must register with the government. This will enable them to obtain approval to construct places of worship, sponsor missionaries, secure visas and immigration permits, operate schools, and apply for subsidies for religious education.

Religion is a compulsory subject at primary and secondary levels in public and private schools. Parents may choose for their children to study Buddhism, Islam, Hinduism, or Christianity, provided there are enough students. Students may not opt-out of religious education even if they can't be taught in their religion of choice or if they do not choose any religion.

For families living day-to-day in Sri Lanka, the pandemic and quarantine measures that followed drove them into further hardship. Day labourers like seven-year-old Pravin’s father, struggled to support the needs of their families and were worried they’d have no food to eat. Pravin, the eldest of two, is registered in Compassion’s Child Sponsorship Programme. With the Compassion project closed due to COVID-19, he has spent his days at home drawing pictures and helping his mother, Rajeni, cut vegetables. Since the pandemic hit, Rajeni can’t help but worry about providing for her family. “My husband lost his job, and he is the only one who works so our only income was gone,” says Rajeni. Even though his father was out of work, Pravin still had faith that the child development centre would come through for his family. Since March, staff have been providing the family with ration packs full of food and essentials to last each month. “I cannot describe how these packs have helped me,” says Rajeni. “I cannot think how we would have gotten food if not for them.” Now that the restrictions have eased a little in Sri Lanka, Pravin’s father is able to work to help support the family. And Pravin anxiously awaits his return to the child development centre to play with his friends and enjoy his favourite food—rice with curry.

For families living day-to-day in Sri Lanka, the pandemic and quarantine measures that followed drove them into further hardship. Day labourers like seven-year-old Pravin’s father, struggled to support the needs 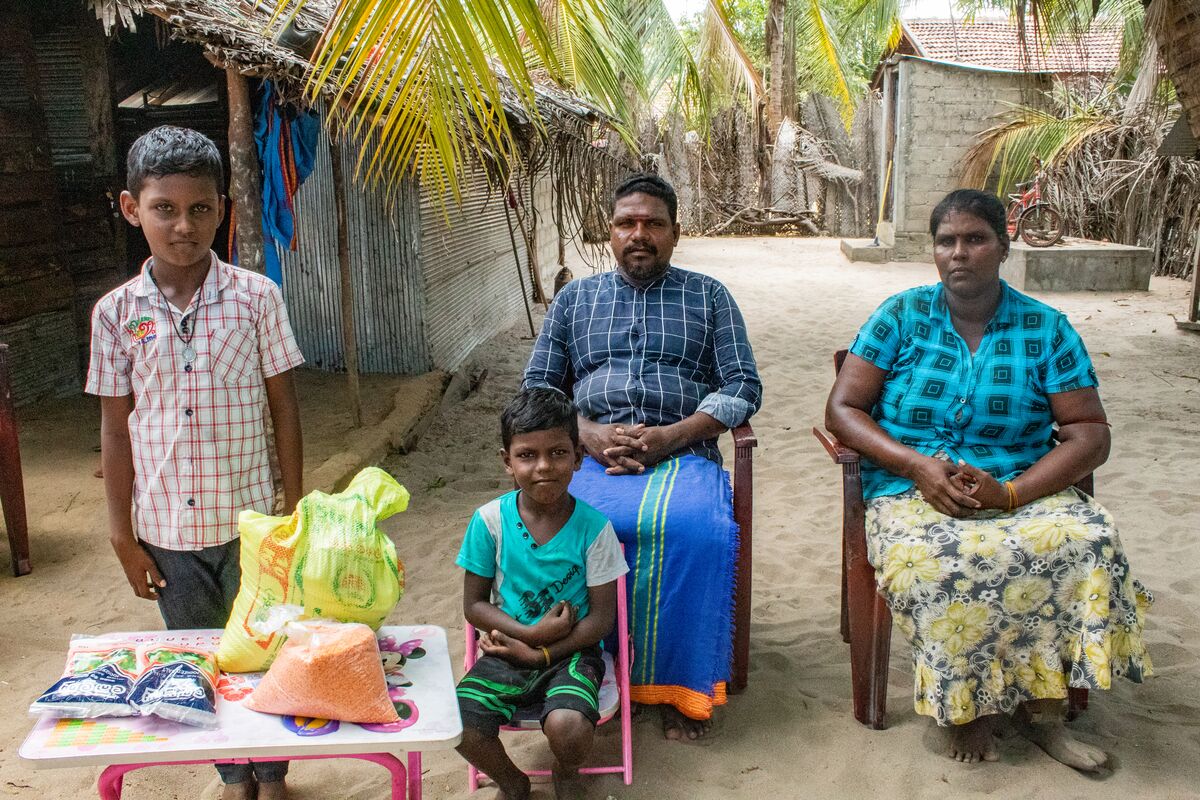