Known for its amazing sunsets and diverse ecology, El Salvador has been steadily recovering from the 12-year civil war that ravaged the country in the 1980s. Many peope still struggle to earn enough to support their families and access to school is a challenge. Compassion-supported children experience these realities daily. But at the Compassion project, there is hope.

This video was released in July 2021.
If you have been inspired to sponsor a child from El Salvador, visit our sponsorship page.

Church partners as they work hard to support their communities

Restoration for families who lost everything in natural disasters

El Salvador is the smallest country in Central America. In fact, it's about 12 times smaller than the United Kingdom!

Sponsor a child in El Salvador

Percentage of children under the age of 5 underweight: 5.0%

Religion: Approximately 42% of the population are Roman Catholic, 38% Protestant, and 20% are of another/unspecified religion or none Infant mortality rate: 12 deaths/1,000 live births Literacy rate: Male 91%, female 87% Percentage living below the poverty line: 22.8% Percentage of children under the age of 5 underweight: 5%

Prior to the arrival of the Spanish in 1524, El Salvador was inhabited by several indigenous groups. Under Spanish rule, European settlers relied on exporting indigo to generate wealth until the mid-19th century.

The focus of the country’s exports changed, and indigenous land was taken for use in cultivating coffee instead. This left many indigenous people landless and without income.

In 1821, El Salvador and the other Central American provinces declared their independence from Spain. In 1823, the country joined with Guatemala, Honduras, Costa Rica, and Nicaragua to become part of the United Provinces of Central America ended the rule of Gen. Manuel Jose Arce. El Salvador became an independent republic in its own right when this federation was dissolved in 1838.

El Salvador’s early history as an independent state was marked by frequent revolutions. Following a deterioration in the country’s democratic institutions in the 1970s, a period of civil war followed from 1980 to 1992. More than 75,000 people are estimated to have died in the conflict. In January 1992, after prolonged negotiations, the opposing sides signed peace accords that ended the war.

Art
The village of La Palma has become famous for a school of art started by Fernando Llort. His childlike images of mountain villages, rural life and Christ are painted in bright colours on objects ranging from seeds to church walls. The town of Ilobasco is known for its ceramics, while the town of San Sebastián is recognised for its textile arts. Poetry is popular, and well-known writers include Manlio Argueta and Francisco Rodriguez.

Music
Salvadorans enjoy the rhythms of the Caribbean. Guitars, marimbas (a percussion instrument similar to xylophone), and drums are used in church services. Most of the music on Salvadoran radio is standard pop from the United States, Mexico, or other parts of Latin America. There is, however, a small underground movement of canción (folk music) that draws its inspiration from current events in El Salvador.

Sports and Games
Many Salvadorans love to play football. Basketball, baseball, tennis, and swimming are other favourites.

Typical Foods
Corn and black beans are the daily diet of most families. Families also like to snack on pupusas (corn cakes filled with chopped meats, beans and spices).

In recent years, El Salvador has initiated major reforms of their secondary education system. The aim is to increase access, improve the quality of education and ensure the curriculum is relevant to the changing needs of the economy – in particular, growth within technology.

However, a large number of children are still unable to attend secondary school because they need to work to support their families. Children often support their parents by working on sugar and coffee plantations, in domestic services, and as street vendors. This is even more common in rural communities where up to 50% of the population lives in poverty.

Beyond secondary school, there are even fewer opportunities for young people to study. According to El Salvador's government statistics, the percentage of the population with a university degree is in the single digits. Moreover, even those who have a degree may struggle to secure a job with a decent wage in El Salvador's competitive job market.

Approximately 41.3% of the population are Roman Catholic, 37.2% Protestant, and 18% are of another/unspecified religion or none.

The constitution allows religious freedom and prohibits discrimination based on nationality, race, sex or religion. The Roman Catholic Church is recognised with official status and all other religions or expressions of Christianity must apply for legal status.

16-year-old Vanessa’s baby daughter was born en-route to hospital in the back of her neighbour’s car. Despite her unconventional start to life, baby Anggy is thriving thanks to her mother’s love and the support from Compassion’s Survival Interventions.

16-year-old Vanessa’s baby daughter was born en-route to hospital in the back of her neighbour’s car. Despite her unconventional start to life, baby Anggy is thriving thanks to her mother’s love and the support f 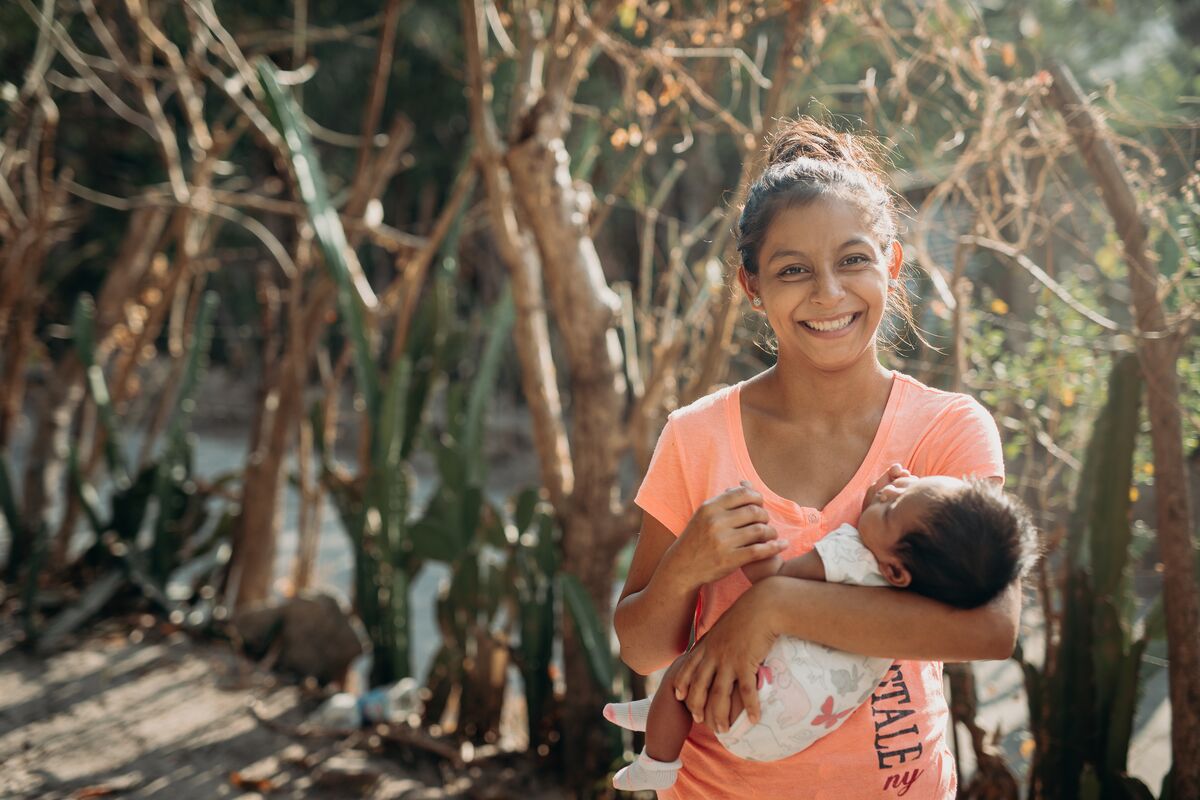