The Dominican Republic’s warm climate and pristine beaches have made it popular with sun-seeking tourists. It’s also home to impoverished communities that struggle with gang activity and unsafe water. Compassion-supported children experience these realities daily. But at the Compassion project, there is hope.

This video was released in July 2021.
If you have been inspired to sponsor a child from Dominican Republic, visit our sponsorship page.

Wisdom for those in leadership as they serve their communities

Protection and good health for vulnerable children and families

Music and dance are very important to Dominican culture. Two of the most popular types of music are merengue and bachata — both perfect for dancing.

Sponsor a child in Dominican Republic

Percentage of children under the age of 5 underweight: 4.0%

Religion: Approximately 48% of the population are Roman Catholic, 21% Protestant, and 31% are of another/unspecified religion or none. Percentage living on less than $1.90 a day: 0.6%

Hispaniola, the second-largest island of the West Indies, is divided politically into the Dominican Republic, which occupies about two-thirds of the country to the east, and the Republic of Haiti in the west. Before Spanish colonisation in the late 15th century, the Taino people lived in village-centred societies in what is now the Dominican Republic.

Christopher Columbus landed on the island in 1492 and named it La Isla Española (Hispaniola in its Anglicised form).

The Tainos welcomed Columbus on his first voyage in 1492, but subsequent colonisers were brutal, reducing the Taino population from one million to around 500 in 50 years. To ensure adequate labour for plantations, the Spanish brought African men and women to the island in 1503 to make them work as enslaved people.

In the 1600s, the French and the Spanish fought for control of the island, eventually dividing it into the Dominican Republic and the Republic of Haiti.

A turbulent history followed, with independence from Spain claimed in 1821. The country briefly returned to Spanish Rule in 1861 before independence was restored in 1865. Economic difficulties, the threat of European intervention and ongoing internal disorders led to a U.S. occupation in 1916 and the establishment of a military government in the Dominican Republic. The occupation ended in 1924 with a democratically elected Dominican government.

The country suffers from marked income inequality, and unemployment is a problem. The poorest half of the population receives less than one-fifth of GDP, while the wealthiest 10% enjoys nearly 40%.

Art
The Dominican Republic has many poets, essayists, and novelists, including former president Juan Bosch. Architecture is another important part of Dominican culture and is clear to see in the Spanish colonial buildings in the capital Santo Domingo.

Music
Dominican folk music features instruments such as the maracas, tambora (small drum), accordion and the guirra (a percussion instrument scraped with a metal rod). The national dance is the méringue.

Typical Foods
A dish of beans and rice is traditionally called the Dominican flag because it's the basic Dominican meal.

The typical school year runs from September to June. Education is compulsory for children aged seven to 14 years; however, many struggle to attend due to a shortage of teachers, facilities and funds.

Education is vitally important to Dominican families who want their children to be able to secure a good profession when they grow up. As a result, families often spend a high percentage of their income on educating their children, especially as they go to higher education.

Even for those who have received an education, the job market is fierce in the Dominican Republic. Employers often look for university graduates with multiple skills and can speak many foreign languages.

Approximately 48% of the population are Roman Catholic, 21% Protestant, and 31% are of another/unspecified religion or none.

There is no state religion in the Dominican Republic. However, the government signed a concordat in 1954 with the Vatican giving the Catholic Church special privileges not granted to other religions. These include the use of public funds to underwrite some church expenses, including renovating church facilities and exemption from customs duties when importing goods.

Religious groups are required to register with the government to operate legally. If other religious groups wish to be exempt from import fees, they need to apply directly to the office of the presidency.

Currently, Roman Catholic weddings are the only religious marriages the government recognises, although civil unions are legal as well.

A 2000 law requires that the Bible be read in public schools, but it is not enforced. Private schools are not obliged to include Bible reading among their weekly activities.

Esmirna and Esmeralda are 17-years-old twins who live with their mother Nancy in Villa Duarte, Santo Domingo. They lost their father when they were just nine years old; he was murdered because of a misunderstanding. They lost everything they had after their house burst into flame. “I saw my aunt, with her feet dirty, carrying a pot from our house to fill it with water. I didn’t understand what was going on. Suddenly, I heard my mum crying so hard. When we looked around, we realised that we had lost absolutely everything. The only thing we had left was the clothes we were wearing,” says Esmirna. Left with only the clothes on their backs and little else, they moved into a new home. It was the only place Nancy could afford. Every time it rained, water flooded inside. They shared a bed and squeezed together, desperate to stay warm and dry. But things started to change when Nancy decided to register her daughters with Compassion’s local church partner. What Nancy loved the most about having her girls registered with at the project was their exposure to the scriptures. As a believer, she believes that the only way her daughters would be kept safe was to hide them in the hands of the Lord. The resilient, brave, and courageous twins recovered quickly from their challenging experiences. Their faith in God grew and grew. But they still lived in poor conditions. All that changed when Compassion intervened, rebuilding Nancy’s home. The family were shocked. Esmerelda says, “We went out, and when we got back home, our home had windows, there were walls to create a room for mum and another one for us, they bought us a bed, a shelf, and a fan. But not only that, they put fun, coloured sheets on our beds, painted the whole house, fixed the floor, decorated our room with flowers, and organised everything. Everything was so beautiful!” Besides the funds to repair their home, the girls received food support and vocational training as bakers. The project gave them all the tools and utensils they needed to bake at home to use their skills to meet their needs. Now Esmirna and Esmeralda have their sights set high. They both aim to become paediatricians—and always have time to help, teach handicraft, and inspire other children at the project.

Esmirna and Esmeralda are 17-years-old twins who live with their mother Nancy in Villa Duarte, Santo Domingo. They lost their father when they were just nine years old; he was murdered because of a misunderstandi 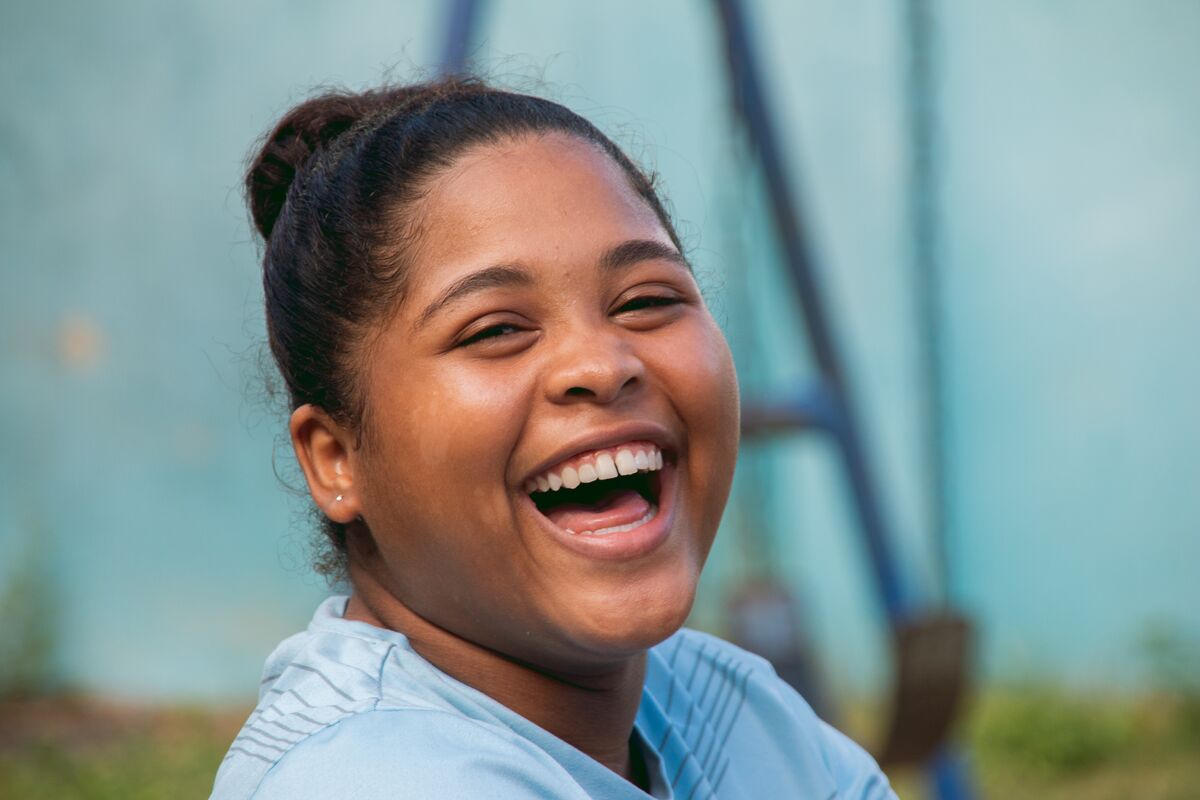