Burkina Faso is home to majestic national parks and captivating wildlife. You will also find many families struggling to find food and stay healthy. Compassion-supported children experience these realities daily. But at the Compassion project, there is hope.

This video was released in July 2022.
If you've been inspired to sponsor a child from Burkina Faso, visit our sponsorship page.

Protection over children, families, and communities in Burkina Faso

Our project partners as they reach and support the most vulnerable

God’s wisdom for governments and those in positions of leadership

Burkina Faso has many different types of terrain. The north part of the country is covered in desert, while the southwest is woodland and savanna.

Sponsor a child in Burkina Faso

Percentage of children under the age of 5 underweight: 16.4%

Religion: Approximately 54% of the population are Catholic, 25% are Protestant, 12% have no religion, and 9% identify as another/unspecified religion.

Burkina Faso has an ancient history, and artefacts from Neolithic cultures have been found in the north. The Bobo, Lobi, and Gurunsi people groups are the earliest known inhabitants of the country.

Burkina Faso, previously known as Upper Volta, was part of French West Africa from 1896 until 1960. When independence was proclaimed, the new constitution was established with an executive president elected for a five-year term.

In 1984, the country changed its name to Burkina Faso, meaning “the country of honourable people.”

Visitors to the country today always receive the warm welcome you’d expect from such an aptly named nation.

The French influence is still very evident amongst more than 60 different ethnic groups across the country. French is the official language and is used in schools, the army, government, and the media. However, many people in rural communities speak no French at all.

There is also great disparity between cities and the countryside in terms of the provision of health, education, and general infrastructure.

Art
Burkina Faso has more than 60 ethnic groups, each with their own distinct social and cultural customs. Burkina Faso is a leader in African art and culture and hosts the largest craft market in Africa. Art made by the Mossi, Bobo and Lobi ethnic groups are the most famous. The Mossi are known for their antelope masks; the Bobo make large butterfly masks; and the Lobi carve wood.

Music
Each ethnic group brings their own unique folk music customs. The Semaine Nationale de la Culture, held every two years since 1983, is a music festival that has helped produce the country's few stars, including Kaboré Roger, Simporé Maurice and Black So Man. The Mande people of the southwest are known for balafon (xylophone) music, while the Mossi are known for their griots - storytellers who often use music to share tales and keep traditions alive. In the north, the Fulbe use complex vocal techniques and percussion.

Rakiire
Because of the diversity of ethnic groups in Burkina Faso, many different cultural practices are observed. One of the most important and widespread customs is Rakiire, where insults are used in jest by friends or families.

However, education is very important for the people of Burkina Faso as the only vehicle out of poverty. In the past, educating boys was considered more important than educating girls. Government policy has tried to redress the gender imbalance.

Through both formal and non-formal education, all are taught to be respectful, polite, obedient, courageous, and hard working. Within the classroom, responsibility, family values and dignity are all emphasized.

Islam, Christianity, and traditional indigenous religions are practiced freely and foreign missionary groups can visit and operate within the country. The law allows religious groups to express themselves freely through publications and broadcasts unless the judicial system determines that they are harming public order or committing slander.

Religious instruction is not offered in public schools. However, there are Muslim, Catholic and Protestant primary and secondary schools. The government reviews the curriculum of these schools to ensure they offer the full standard academic curriculum.

19-year-old Reina has done outstandingly well at school, winning the national prize in Burkina Faso for physics and maths! Growing up in extreme poverty with his grandmother Viviane, Reina’s future looked uncertain. But with hard work and the support of his Compassion project, which helped with school fees and supplies, he has excelled! Raina is about to start college and learn IT engineering.

19-year-old Reina has done outstandingly well at school, winning the national prize in Burkina Faso for physics and maths! Growing up in extreme poverty with his grandmother Viviane, Reina’s future looked uncerta 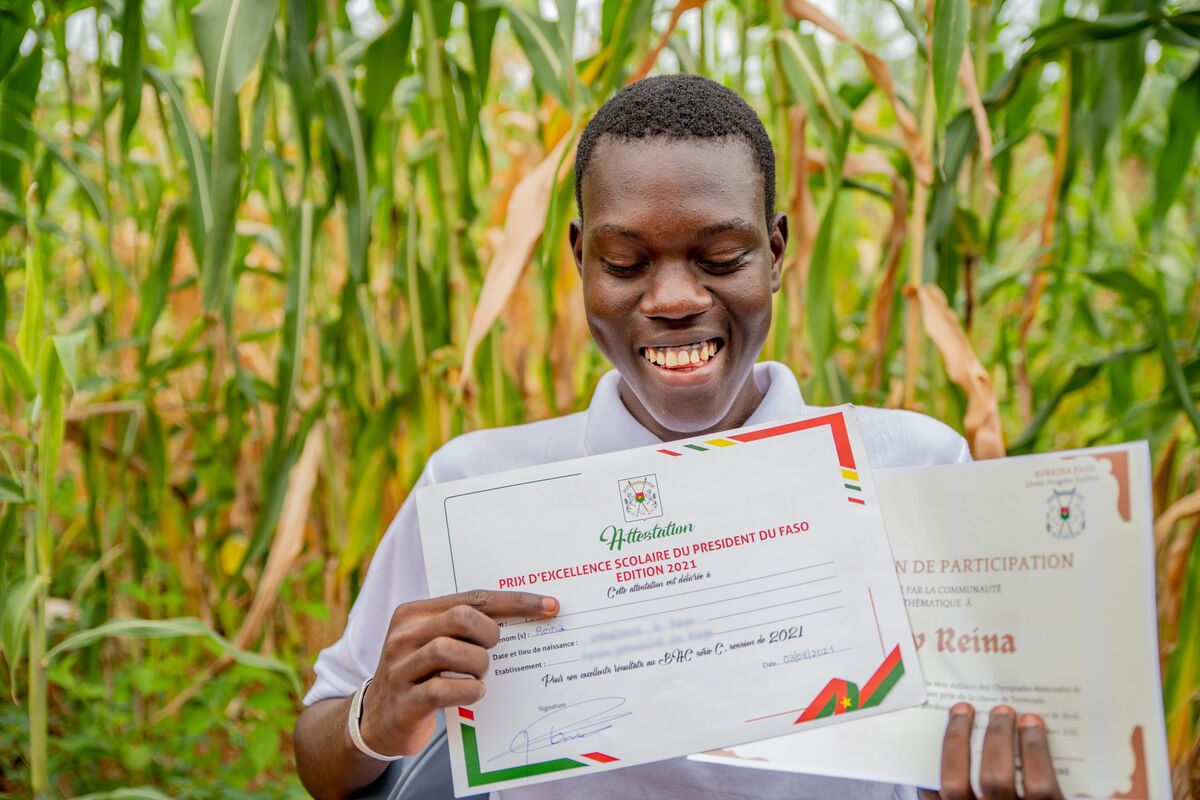