Child Marriage: 4 Remarkable Girls Speak Out to Stop the Weddings

UNICEF reports up to 10 million more girls are at risk of child marriage over the next decade because of the pandemic – that’s equivalent to every student currently in school in the UK. Meet four teenage girls from different countries who boldly proclaim the dangers of child marriage. Learn why and how to prevent girls like them from saying, ‘I do’ too soon.

It’s time to end child marriage. Compassion has collaborated with four teenage activists; Tisha, aged 14, from Bangladesh; Lauri, aged 13, from the Dominican Republic; Mart, aged 13, from Ethiopia; and Yolane, aged 14, from Brazil. Each of the girls featured are not at risk of early marriage but are themselves advocates against the harmful practice prevalent in each of their home countries. Many have friends or family affected by this issue and have chosen to speak out.

With their parents’ permission, they participated in this staged photoshoot to send a clear message: Stop The Weddings.

Tisha gazes blankly at the camera with kohl-lined eyes. She is veiled in silken red fabric and festooned with golden jewellery traditional garments for her region of Bangladesh. Her skirt trails clumsily after her. It’s too long. It was made for an older woman.

Staring down the barrel of the camera, she boldly proclaims a short phrase in Bengali. 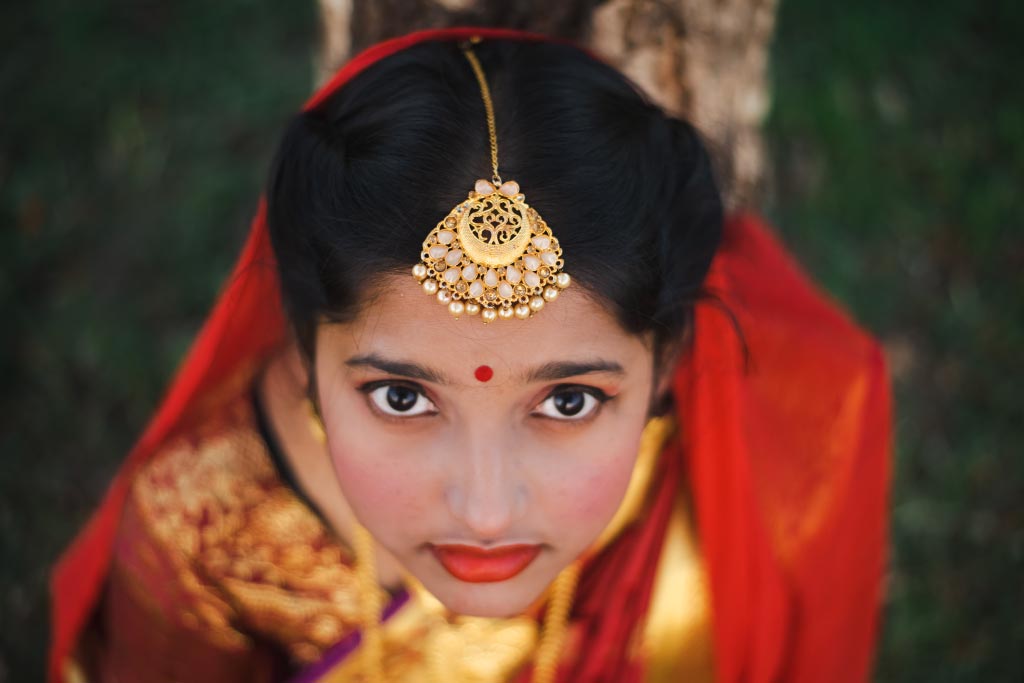 Despite appearances, Tisha is not a child bride. Several of her friends are already wed, though.

“When I walk past their homes carrying books and a school bag, it hurts me to see girls my age instead washing dishes and providing service for their in-laws,” she says. 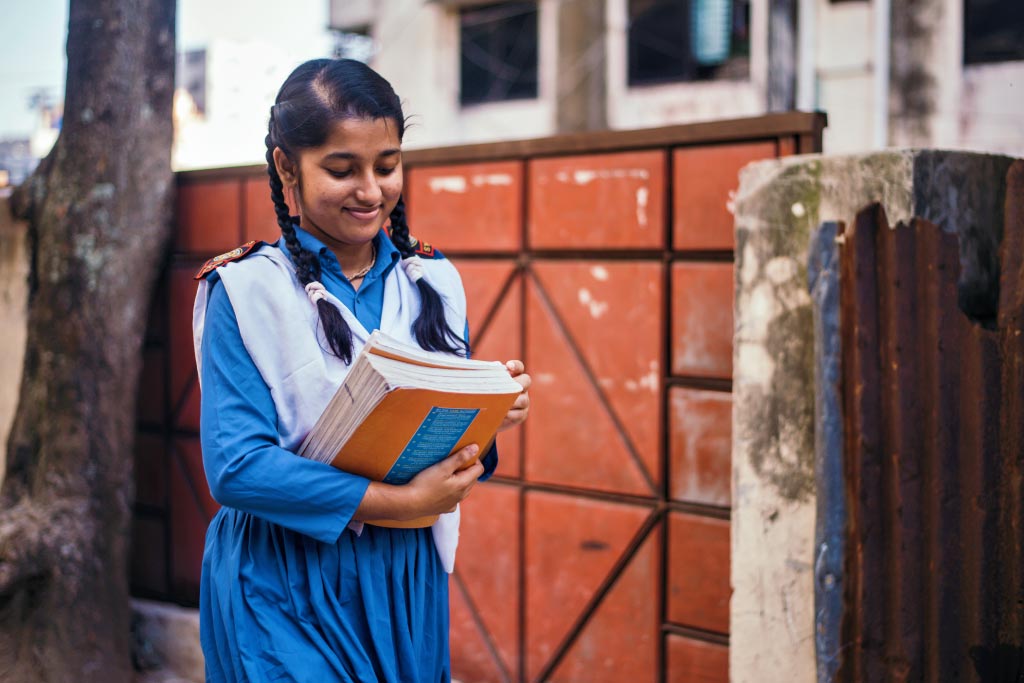 “No teenagers should get married,” says Tisha, passionately. “When someone has so much scope in life and so many things to do in the future, why sacrifice that? Marriage is not the solution to life’s problems.”

What is forced child marriage?

Child marriage is defined as marriage before the age of 18, including informal unions. It’s a violation of children’s rights.

“Child marriage creates a nightmarish legal trap for children,” says Fraidy Reiss, founder of advocacy organisation Unchained at Last. “They can be entered into the marriage by parents and/or a judge, with little or no input from them.” 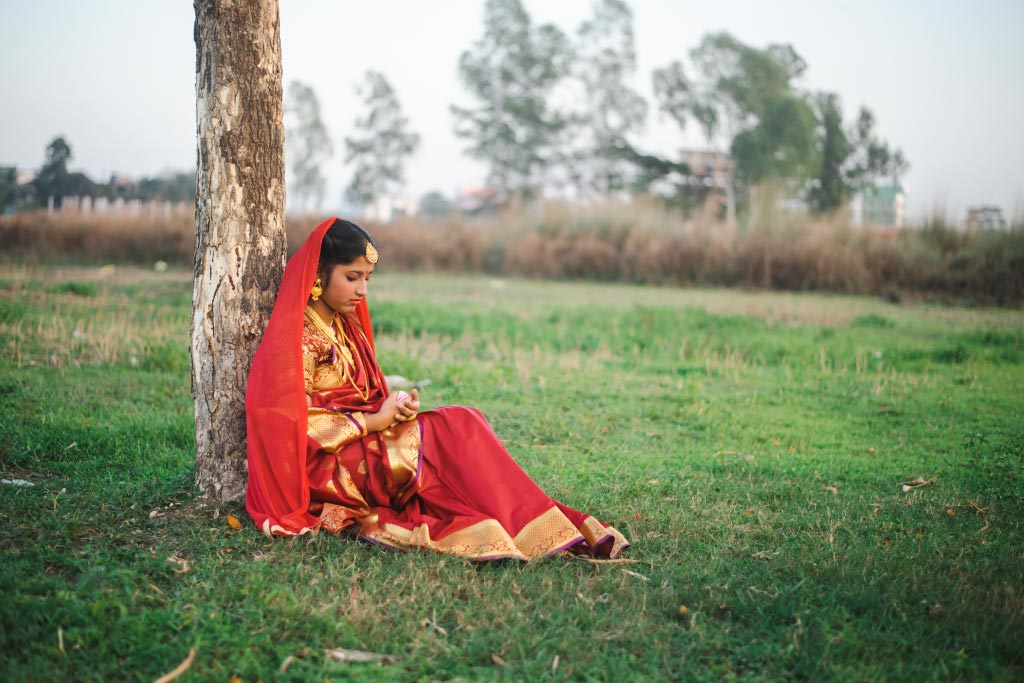 Where is child marriage most common?

Bangladesh, Ethiopia and Brazil are amongst the five countries that account for about half of the 650 million child marriages globally. Despite child marriage being illegal in many countries, it remains widespread globally, including in the UK.

Why are children at risk? Some child marriage statistics.

Although girls in higher-income countries are at risk, early marriage is often more prevalent in communities where there is poverty, where girls have less access to education and fewer rights – these have been exacerbated by the pandemic.

Worldwide, 15 million child marriages occur every year. Alarmingly, the effects of the pandemic are predicted to increase the harmful practice with UNICEF reporting that up to 10 million more girls will be at risk over the next decade as a result – that’s equivalent to every student currently in school in the UK.

The pandemic is increasing the risk of children marrying in several ways. Education is proven to prevent early marriage, with each year of secondary school reducing a girl’s likelihood of marrying before age 18. Yet school closures triggered by COVID-19 may cause girls to drop out entirely or be less likely to re-enrol.

“COVID has created a situation where we know that millions of children will not go back to school,” says Sidney Muisyo, Chief Programme Officer for Compassion International. “Every girl who gets educated delays marriage and delays bearing children. The health of the mother, the health of the children and the health of the family is impacted for years to come, simply because of an early marriage.”

Along with school closures, the pandemic has isolated children from social services. Already vulnerable girls have been cut off from teachers, health professionals, the justice system, and other services that can recognise and support a girl in crisis.

Finally, the pandemic has plunged families into desperate poverty. They were poor before. They are poorer now. “When a family is struggling with the basic necessities of life, like food, any child is an extra mouth to feed,” says Sidney Muisyo, “and if a girl can get married, that is one less mouth they have to worry about.”

For parents, it can be a complex and heart-breaking decision. Some feel forced to choose between their daughter’s future and their family’s survival; others believe she will be better off as a bride. 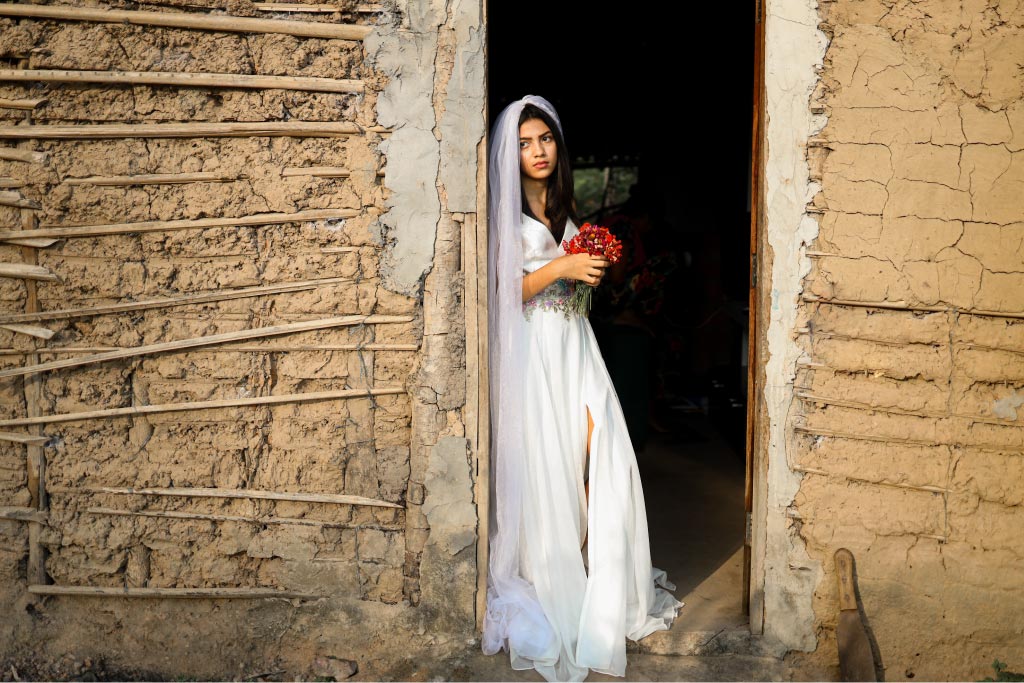 In Brazil, 14-year-old Yolane leans against her simple mud home. She’s dressed in a sagging satin wedding gown and is the same age her sister was when she wed.

“First, she left home to live with her boyfriend,” says Yolane. “That’s how it happens most of the time here.” Then, a year later, her sister fell pregnant.

“A lot of parents encourage girls to marry because girls are seen as a burden at home,” she says. 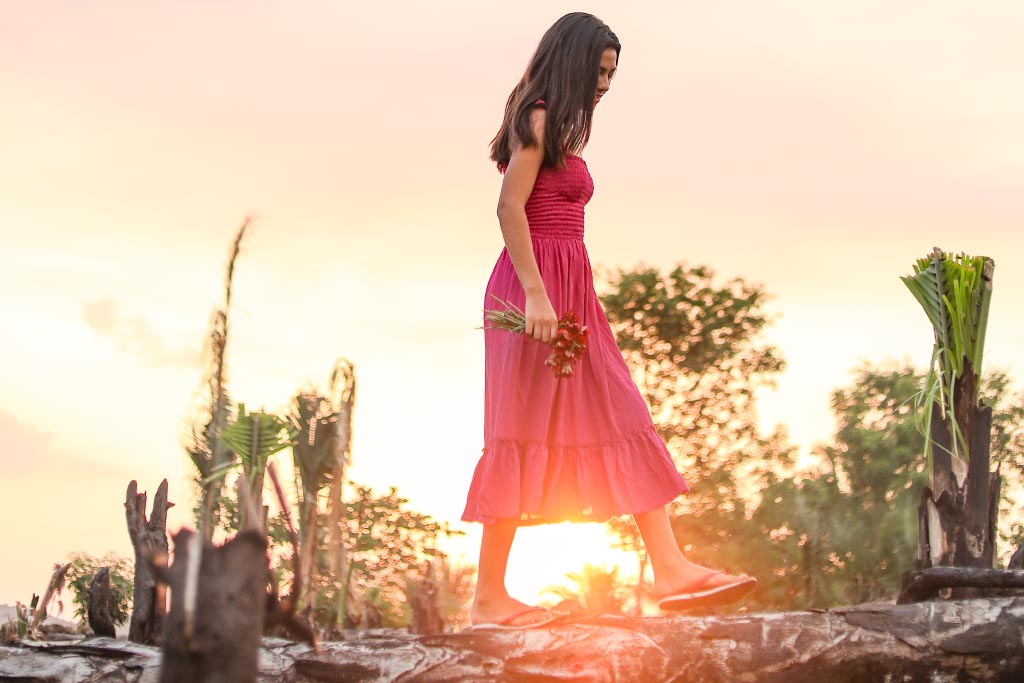 How is Compassion working to prevent child marriage?

Through awareness campaigns, Compassion’s partners all over the world are helping to prevent countless early marriages. Yet despite their best efforts, there are still a small number of children who depart the programme early to be wed.

“When staff learn about any possibility of a child facing marriage, most of the time they are able to stop it, with the support of local government,” says Liza, Child Protection Specialist for Compassion Bangladesh. “However, many of the marriages happen secretly and far from the child’s community.”

Of this number, the overwhelming majority are girls; 1 in 5 young women aged 20 to 24 years old married before their 18th birthday, compared to 1 in 30 young men.

“When a man approaches with a promise of a better life and financial security,” says Letera, a Compassion project director in Ethiopia, “they get married even if they are still children.” 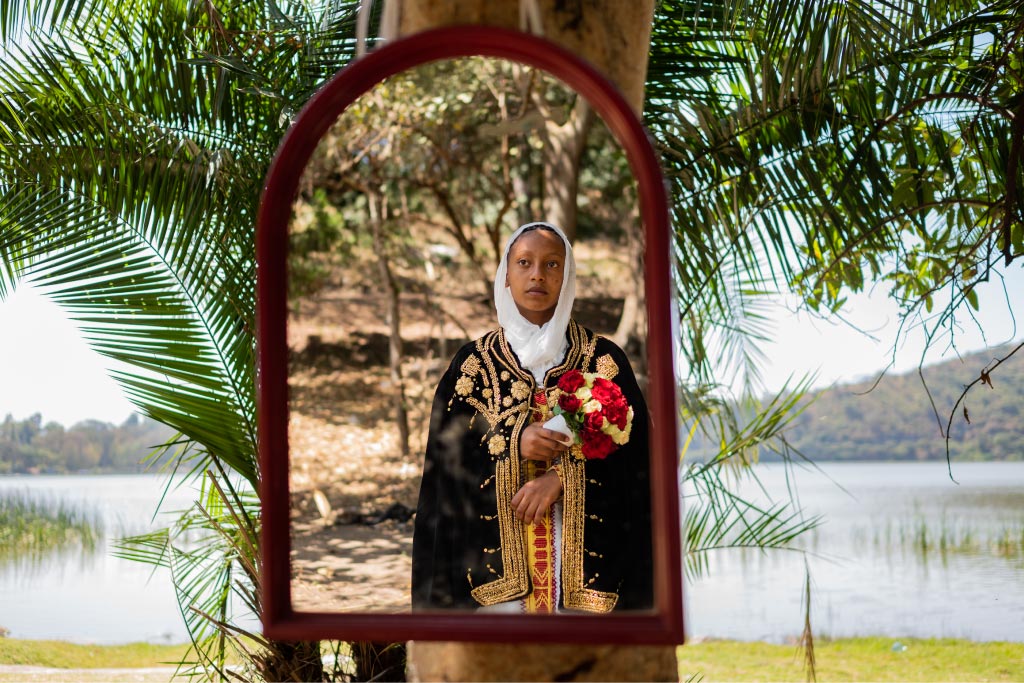 The impact on children

Tisha, Yolane, Lauri, and Mart look beautiful—if alarmingly young—in their wedding finery. Sadly, the reality for young brides is far less glamorous. For girls living in poverty, there is often no ceremony or festivities at all, and “the fairy tale they imagined soon crumbles,” says Compassion tutor Claudeane in Brazil.

Marrying in childhood denies girls the opportunity to develop their full potential. They are not only robbed of their childhood but are often socially isolated. They are taken out of school, separated from family and friends, and assume responsibilities they are too young for.

“It is basically a marriage to hardship and to hard labour,” says Sidney Muisyo. 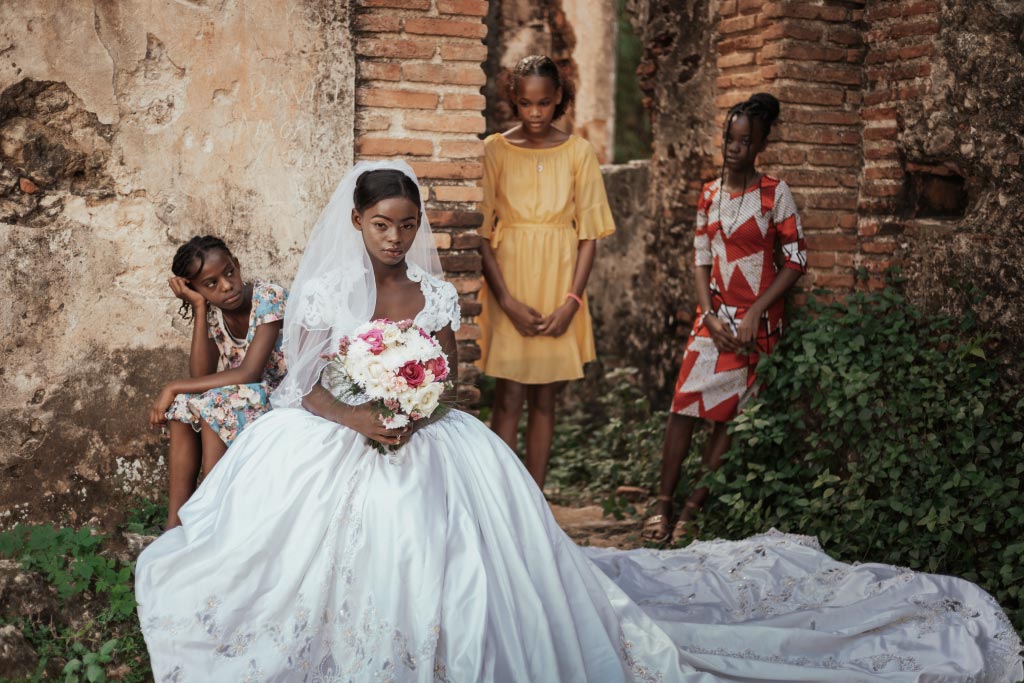 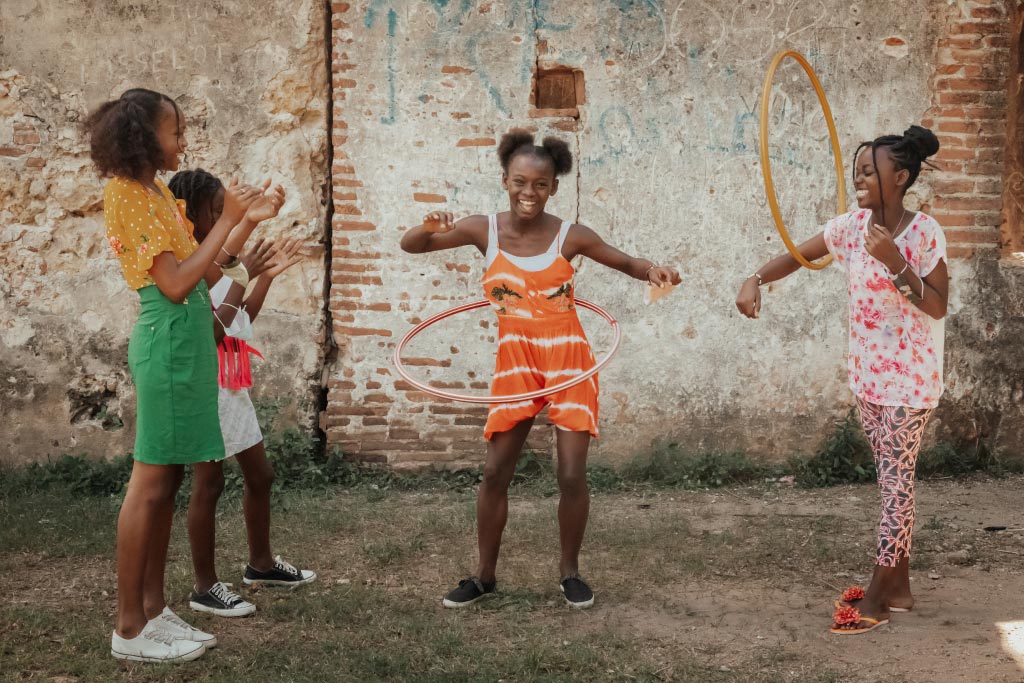 In contrast, 13-year-old Lauri swings a hula hoop as her friends joyfully cheer her on. It’s starkly different to the scene just hours ago when Lauri wore white lace. She says she won’t consider marriage until after she has achieved her dreams.

“A girl who gets married young must drop out of school, dedicate themselves to cleaning the house, and take care of a child and a man that she doesn’t understand,” she says. “Instead of moving forward, it is like her life has frozen.”

And once married, the pressure to become pregnant can be intense, even though girls’ young bodies are not always ready to give birth. “A girl is not prepared physically or mentally to assume the role of a grown-up,” says Lauri. 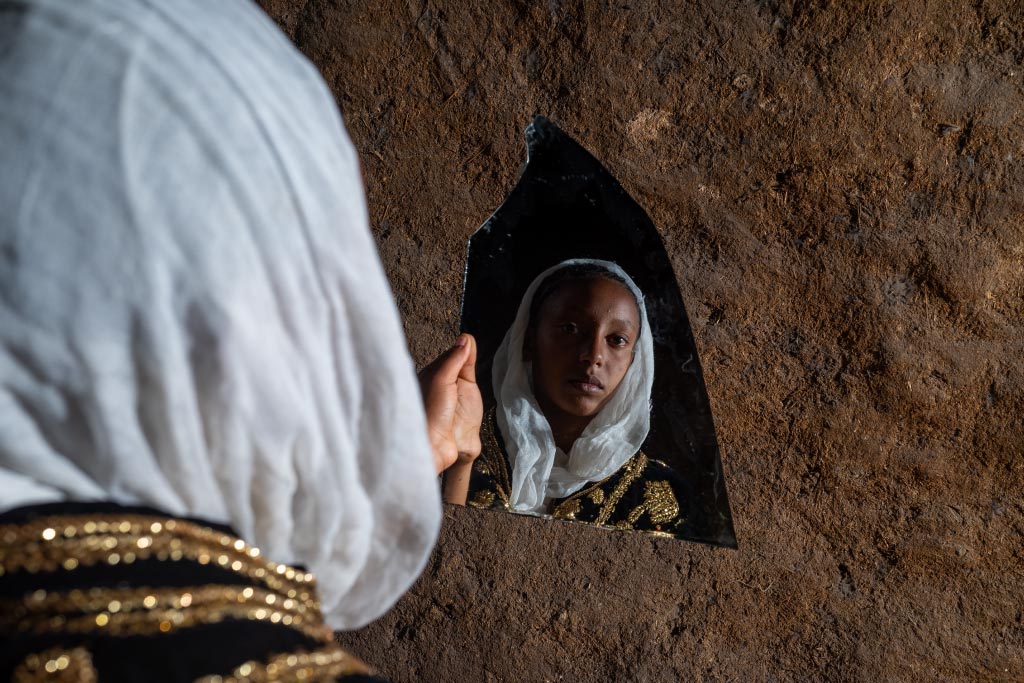 “Girls should be in school,” says 13-year-old, Mart, firmly.

“They should be allowed to pursue their education and become who God wants them to be. Everything is good when it is done in its own appropriate time.”

While the situation facing so many young girls around the world is desperate, but not definite.

At a grassroots level, girls like Tisha, Yolane, Lauri, and Mart—encouraged by their supportive parents and cheered on by Compassion project staff—share their powerful message.

“There’s a time for everything,” says Lauri.

“Our age is the time to mature, play, grow, learn, and develop our skills and minds to build a future where we can handle responsibilities like marriage.”

Will you stand with Lauri, Mart, Yolane and Tisha?

The four girls are sponsored at their local Compassion projects, where dedicated staff and tutors help ensure they are known, loved, and protected. Will you stand with Lauri, Mart, Yolane and Tisha to help other girls?

Your funding will train 80 Compassion staff and 144 parents and caregivers of Compassion-supported children to deliver community-based workshops on the dangers of child marriage.

Workshops will be delivered over the space of a year to more than 8,500 household members across 36 Compassion projects.

The Compassion sponsorship programme already provides girls in Bangladesh with a good education, skills, encouragement, and social support. By donating to Compassion’s child marriage prevention project, you can help educate the wider community on the dangers and disadvantages of child marriage and protect young girls’ futures. 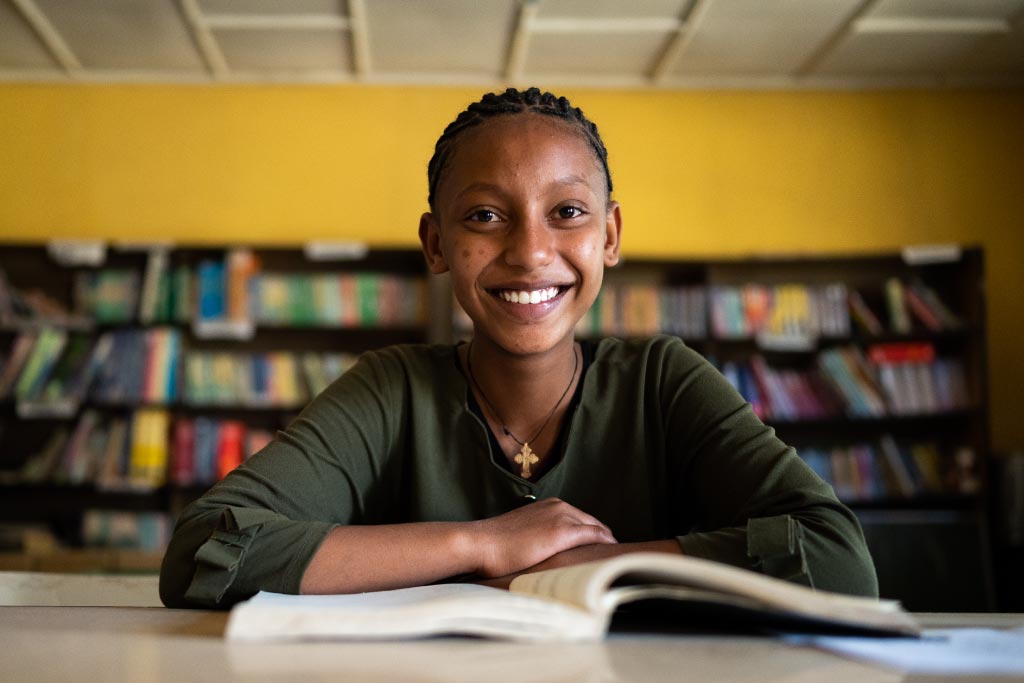 “Our role is to be there to encourage their dreams and show them a new path,” explains tutor Claudeane in Brazil.

In Ethiopia, project director Letera agrees. “We need to emphasise that girls are not the property of the husbands or their parents but are change-makers,” she says. “Girls can be wives, mothers, and productive members of society who can contribute to the development of their country.”

Lauri intends to become a paediatrician, Tisha a doctor. Yolane plans to build a two-floor home for her family—with a pool in the backyard. (She helped build their current mud home.) With quiet determination, Mart says, “My dream is to pursue my education and bring my family out of poverty.”

In Bangladesh, as the camera clicks, Tisha’s proclamation—“Stop the weddings!”—has an instant and dramatic effect.

Back at home, Tisha swaps the scarlet and gold sari for her neat blue uniform. She enjoyed wearing the beautiful clothes for a day. But this dress feels much more comfortable.

Carrying her textbooks, she heads to school. 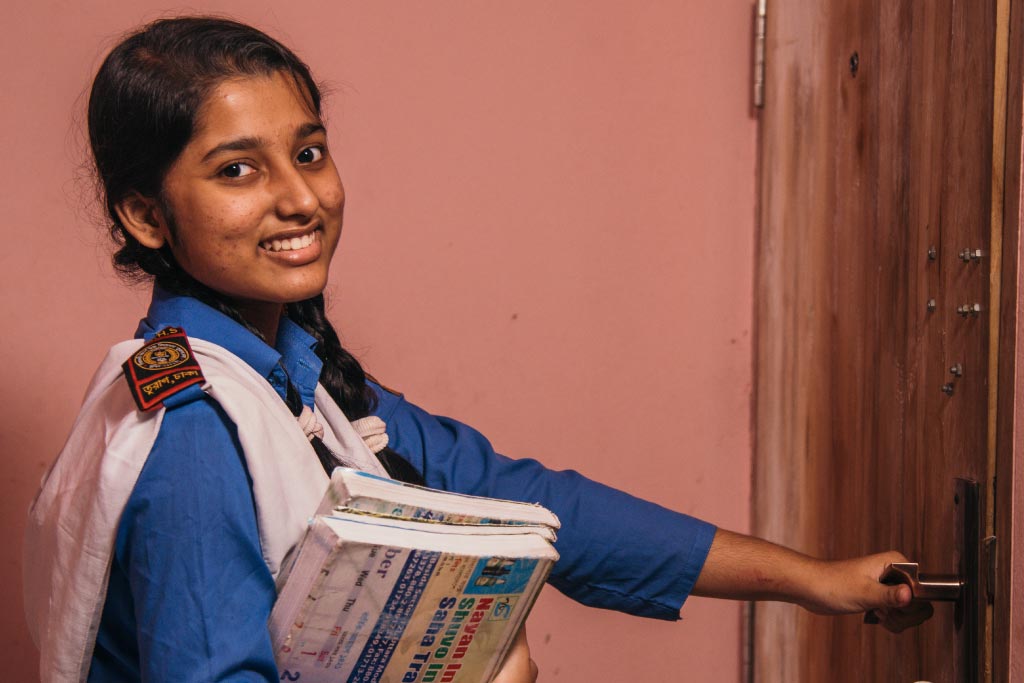