Running in Rwanda: my half marathon diary

Editor of the Evangelical Alliance, Amaris Cole, journeyed to the land of a thousand hills to run a race against poverty. 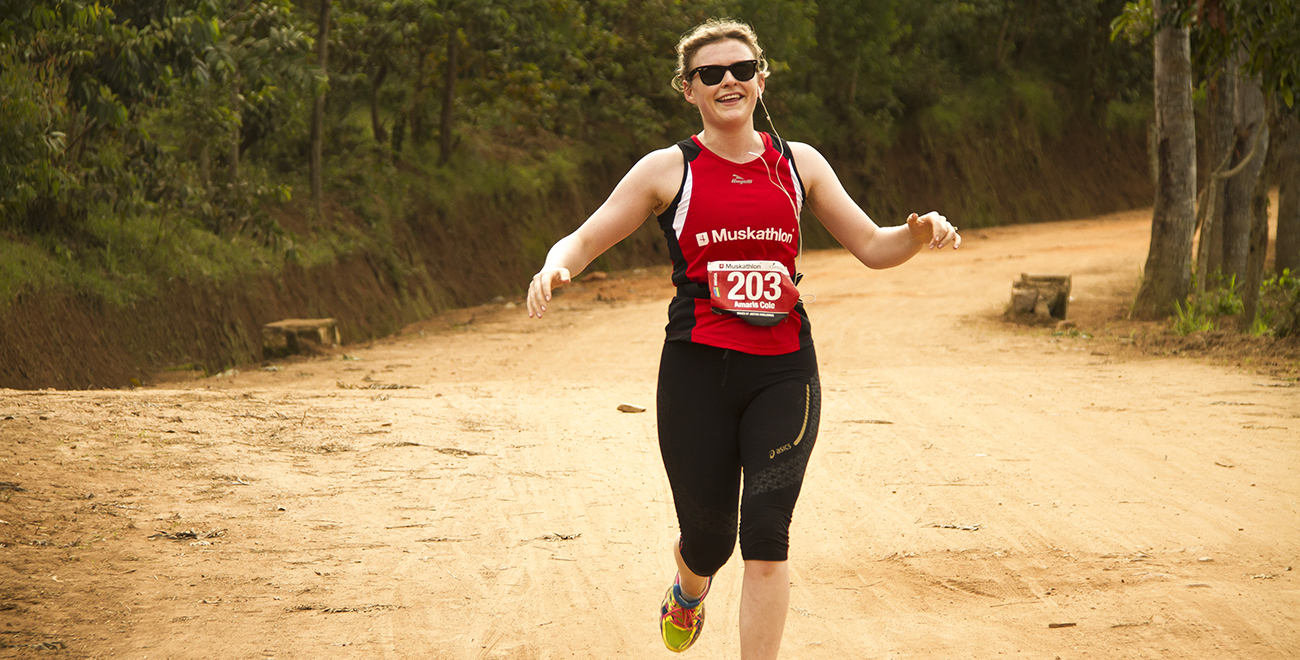 I went to Rwanda stressed. I was planning a wedding, buying a house and moving jobs. At times, I thought the trip was an inconvenience. Other times I thought maybe it was the distraction I needed. Never did I think it could change my life. But the more I think about it, the more I realise just how much it did. 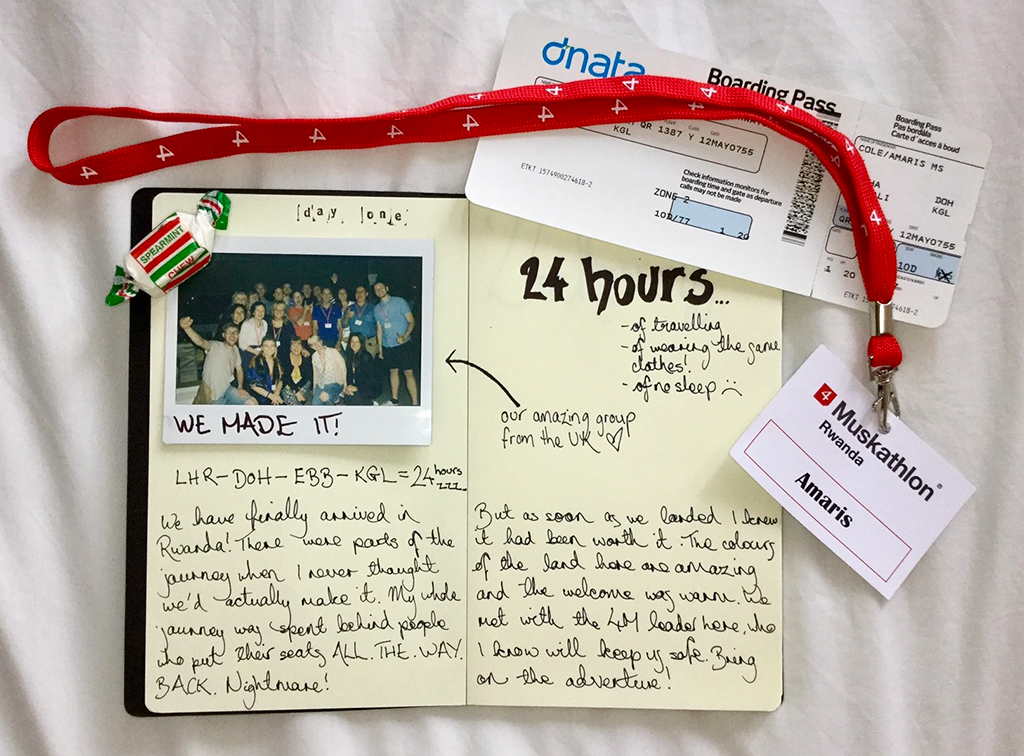 We arrived and not only were we in another continent, it might as well have been another world. Noise, smells, colour. Everywhere we looked there was action. Rwanda, Africa. We had arrived. ┬Ā 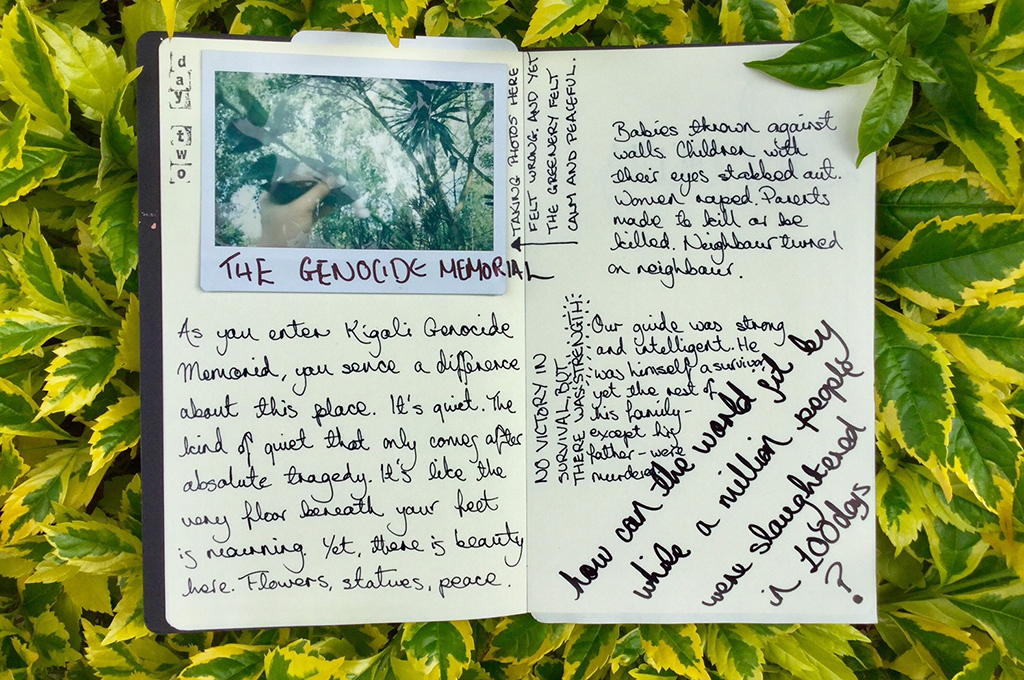 The first stop was the Genocide Memorial.

You never know how you will feel when you enter a place like this. So much tragedy can sometimes feel so overwhelming that it doesnŌĆÖt sink in. But this centre, standing tall on the hillside of Kigali, had an atmosphere that demanded your attention. It was like you could sense some of the pain left over from 30 years before. The testimonies on the films, the accounts written on the walls of the exhibition, the graves where the bodies of some victims have been laid to rest.

How could this happen? 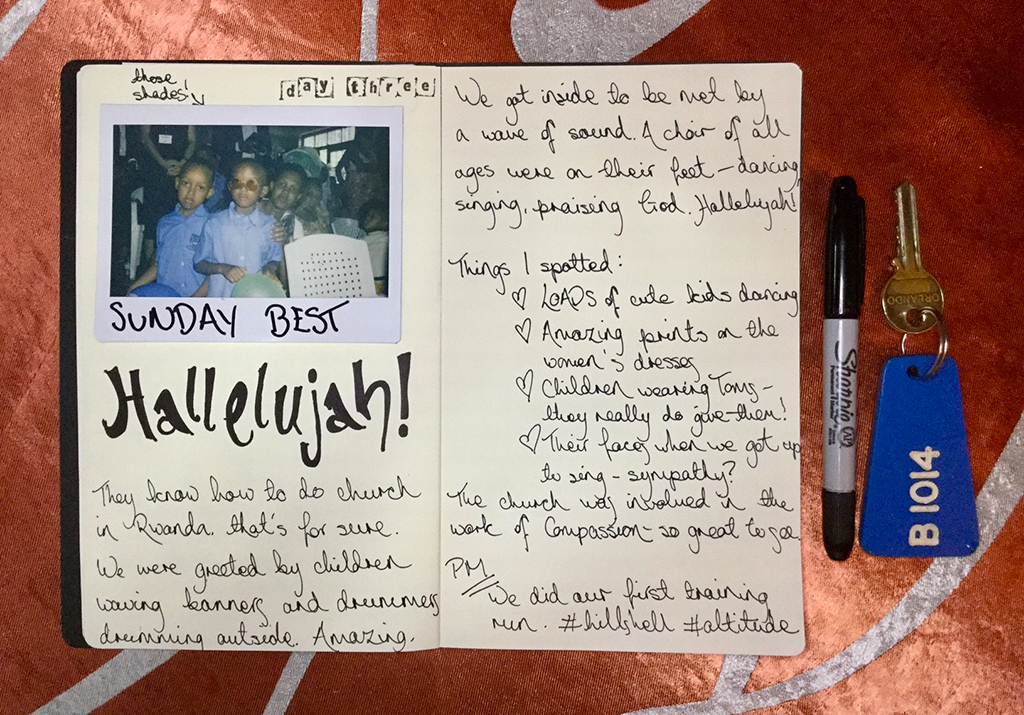 We got taken to church. Big time. This Sunday morning was far louder ŌĆō and longer ŌĆō than my usual! Choirs, drama, dance and JOY. From the welcome of the village who danced to the beat of the drums, to the goodbye of the children running alongside our bus, waving us off, we had been blessed ŌĆō in style! I wonder if this is what heaven will be like. 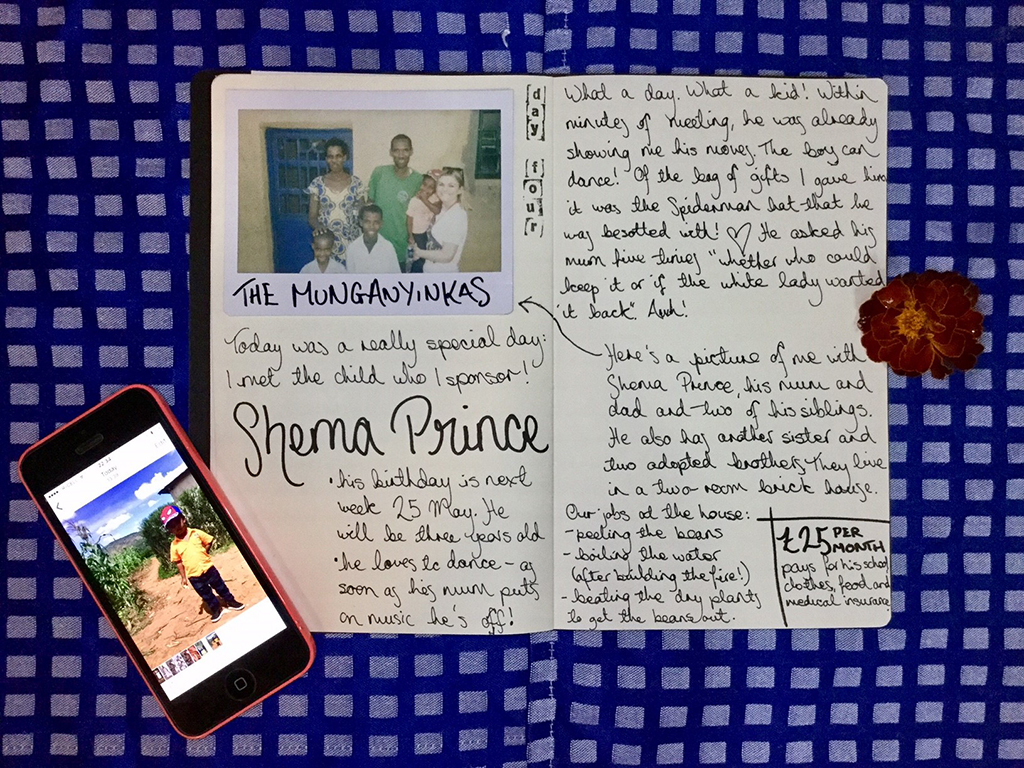 A life-changing day. When all the other groups had been sent off to visit the homes of children in the community, I sat waiting, wondering if today would be the day I would meet the little boy I sponsored with Compassion. His family hadnŌĆÖt realised today was when they were supposed to meet us, we were told, and so no one was sure whether it would now be possible.

Then, clinging to the leg of his mother, I see 3-year-old Shema Prince, and my heart felt like singing. From the moment he gave me a hug, as instructed, I felt a connection to this little boy that I know will continue for many years to come. I feel so honoured to be a part of his life, and his family made it clear just how grateful they were too. 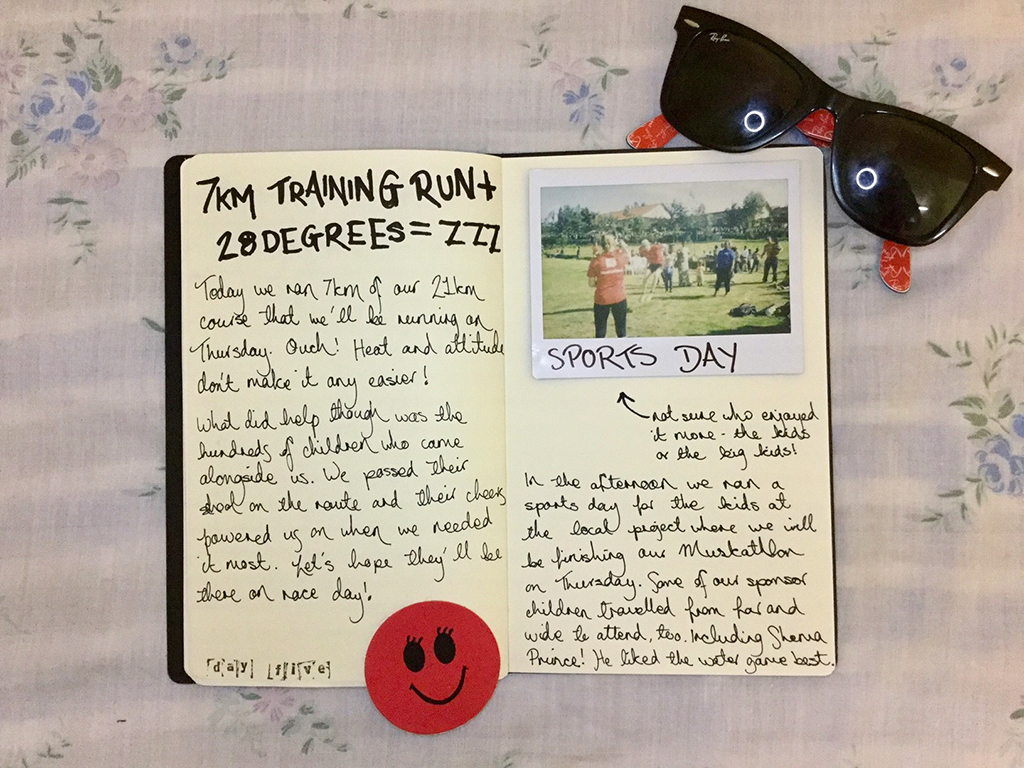 Running in high temperatures at a high altitude is hard! TodayŌĆÖs training run was seven kilometres across the hills of Rwanda ŌĆō part of the route we will run during the Muskathlon on Thursday. Ouch! Later, we helped at a sports day that had been organised for our sponsored children and others helped by Compassion. It felt as though for some, this was a very rare opportunity to act like the children they are, rather than the grown-ups they may sometimes feel they need to be. 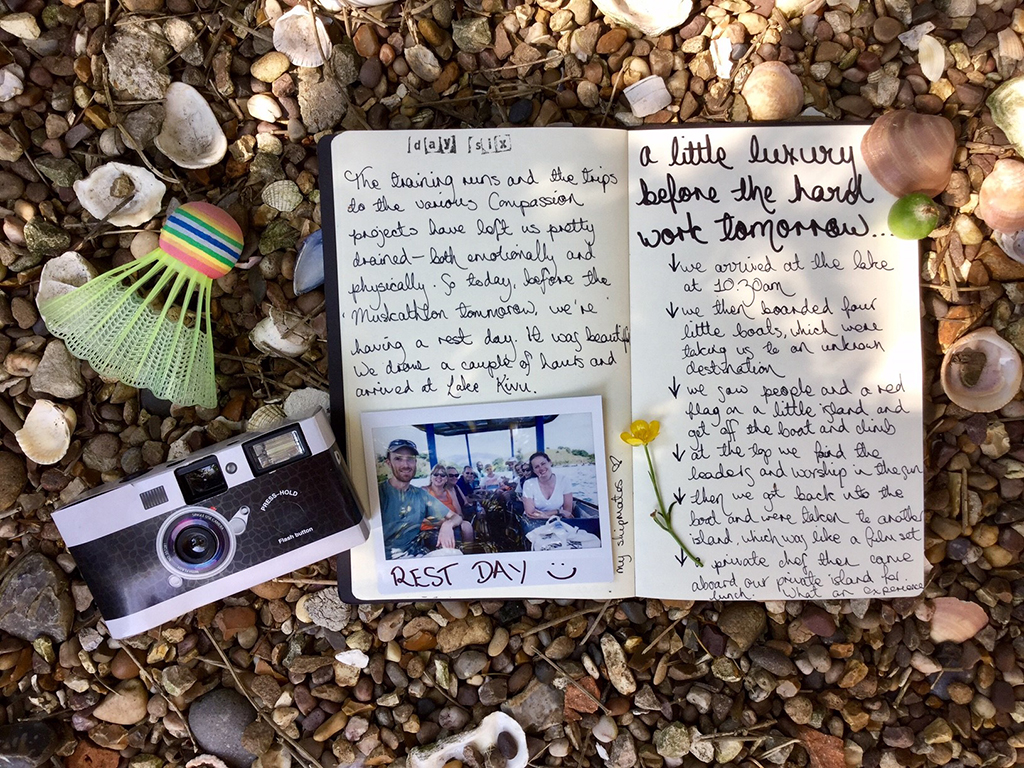 Rest day. All we were told is that we were headed for Lake Kivu, but the surprise was certainly worth the wait. After piling into little boats and sailing out of the bay, we spotted an island with a red flag on top. On arrival, we climbed up the hill to find members of our group singing worship songs in the blazing sunshine. We all joined in, singing out across the amazing beauty of the lake, thanking God for all He has done. It was very special.
We then got back into our boats, this time on the search for some lunch. We were not disappointed. Landing on another island, we found waiters and chefs ŌĆō complete with those tall hats! ŌĆō lined up with cold drinks and hot food. It was like something out of a film! 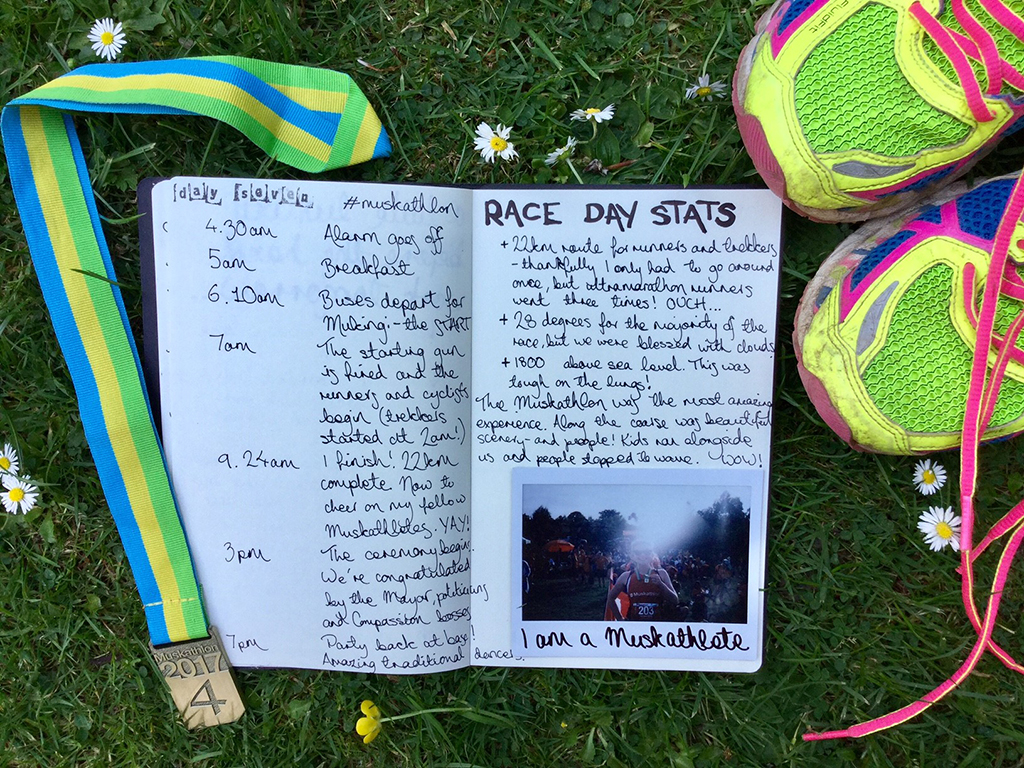 Race day. It began early with my roommate ŌĆō who was doing the trek ŌĆō leaving around 1.30am! I had a ŌĆślie inŌĆÖ until 4.30am, when we were up for breakfast and last minute preparations for the run or cycle ahead of us.

I felt strangely nervous, but took my place on the start line at 7am, surrounded by strangers who had over the course of the week become friends.

The route was hard. Up dirt tracks, down dusty roads, through villages and countryside. But we made it. Every single one of us. The medal I received felt good hanging around my neck ŌĆō I had earnt that.

The rest of the day was a celebration ŌĆō for the challenge weŌĆÖd completed, the huge amount of money weŌĆÖd raised, and most importantly, of our newfound love for this country and its people.

I will never forget my time in Rwanda. I always knew it was good to sponsor a child, but sometimes I was guilty of thinking about the other things I could spend that ┬Ż28 on. Since meeting Shema Prince, I realised that ┬Ż28 is the best money I spend all month. None of us alone can stop poverty, but we can each just help one person, and I will never again underestimate just how much good that does.

Amaris joined a team of 22 race-goers from across the UK to take part in a Muskathlon, an overseas adventure challenge hosted by 4th Musketeer and Compassion UK. Muskathletes chose from a half, full or ultra-marathon, 120km cycle or 60km walk through the communities┬Āthey're fundraising for.

Could you follow in AmarisŌĆÖ footsteps and take on the exciting challenge in Kenya in June 2018? Find out more >

Read┬Āmore of Amaris' adventure by following her on Twitter @AmarisCole

5 Ethical Gifts to Help You Shop Compassionately This Christmas

From handmade crafts to gift experiences, discover present ideas with a conscience.

Child Poverty: the Facts and the Future

Your in-depth guide to child poverty and how we can tackle the challenges.

From a Cardboard Box to a Seeker of Justice

“The support of a sponsor helps children to be better and stronger than they could ever imagine.”

Which of the WorldŌĆÖs Most Extreme Jobs Could You Do?