Why I turned the tide on men’s magazine culture

We chat to editor of Sorted and Compassion Ambassador, Steve Legg. 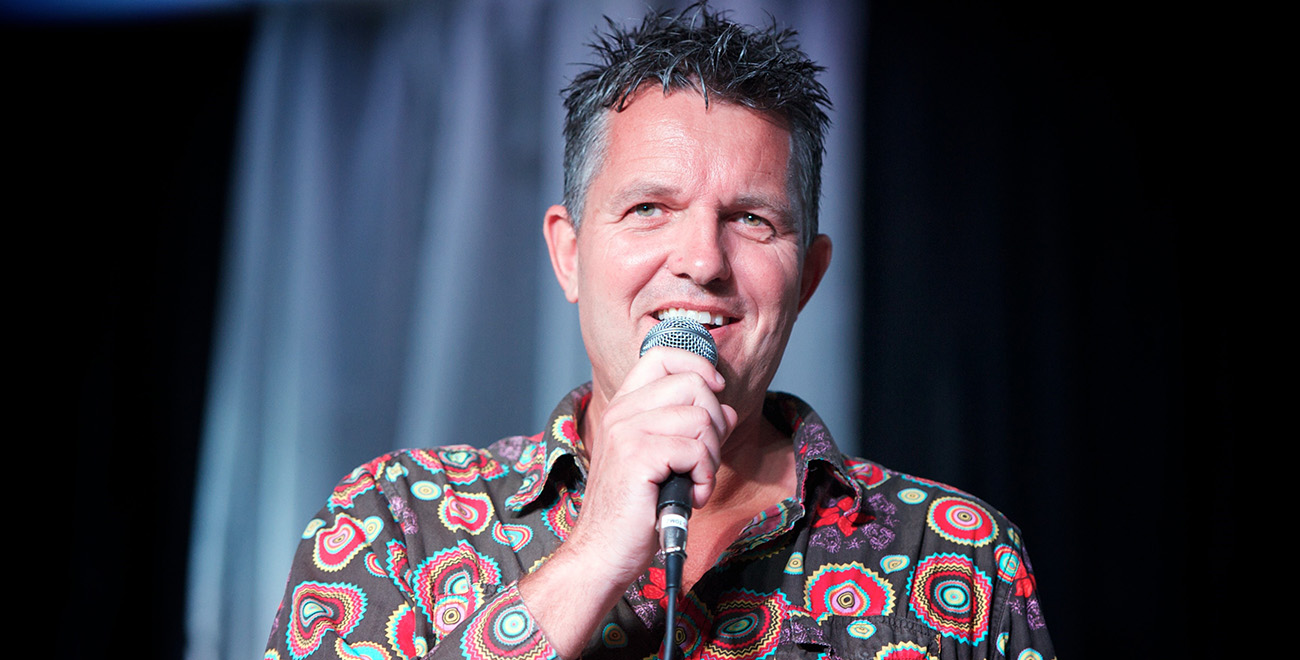 In a seaside town on the south coast just over ten years ago, Steve Legg had a dream to turn the tide on menâ€™s magazine culture and the first issue of Sorted hit the shelves. A menâ€™s magazine with faith at its core, Sorted is packed full of topical articles, reviews and in-depth interviews. Today,Â it has over 100,000 readers worldwide and is launching a special birthday edition this month.

To mark this milestone we caught up with editor and friend of Compassion Steve Legg.

Congratulations on celebrating Sortedâ€™s tenth birthday, so how did it all begin?

The vision for Sorted started when a mate was complaining about how his 11-year-old son's mates were bringing lads mags into the playground and he talked about the need for something more positive and wholesome. That conversation got me thinking and praying and then in November 2007 we launched the first issue of Sorted, at a menâ€™s event at the Odyssey Arena in Belfast.

Sorted aims to encourage men in their faith. How has your personal faith shaped the magazine?

Becoming a Christian at a Boysâ€™ Brigade camp when I was 13 turned my whole life upside down. I couldnâ€™t believe that no-one had ever communicated this message to me in a way that I understood, so ever since Iâ€™ve been passionate about creative communication without beating people over the head with a big black Bible and singing Kum by Yah.

Why do you feel itâ€™s important for boys to have positive role models?

Kids look up to all sorts of pop stars, actors and reality TV stars. I guess itâ€™s all part of growing up. Iâ€™d much rather they were good and positive role models who they would want to emulate. Thatâ€™s why itâ€™s been such a thrill for Bear to have been involved in the magazine for the last 10 years.

When you started Sorted there was nothing else like it in the menâ€™s magazine industry. What advice would you give someone who is thinking of stepping out and pursuing a dream to make a difference?

Yeah it was really unique and financially a crazy thing to do but I do believe that finance follows faith. The advice I constantly give myself as well as others is threefold: take a chance, be the first and make it happen.

Itâ€™s been quite a decade for Sorted, how have you seen the magazine impact peopleâ€™s lives?

Itâ€™s been amazing. Ten years on weâ€™re available in hundreds of WHSmith stores nationwide, in 21 countries worldwide. We also send thousands of free copies to members of the armed forces and into over 60 prisons in the UK. Itâ€™s a privilege to frequently hear incredible stories of guys who have come to faith through Sorted.

Whatâ€™s in store for the 10th birthday special edition? 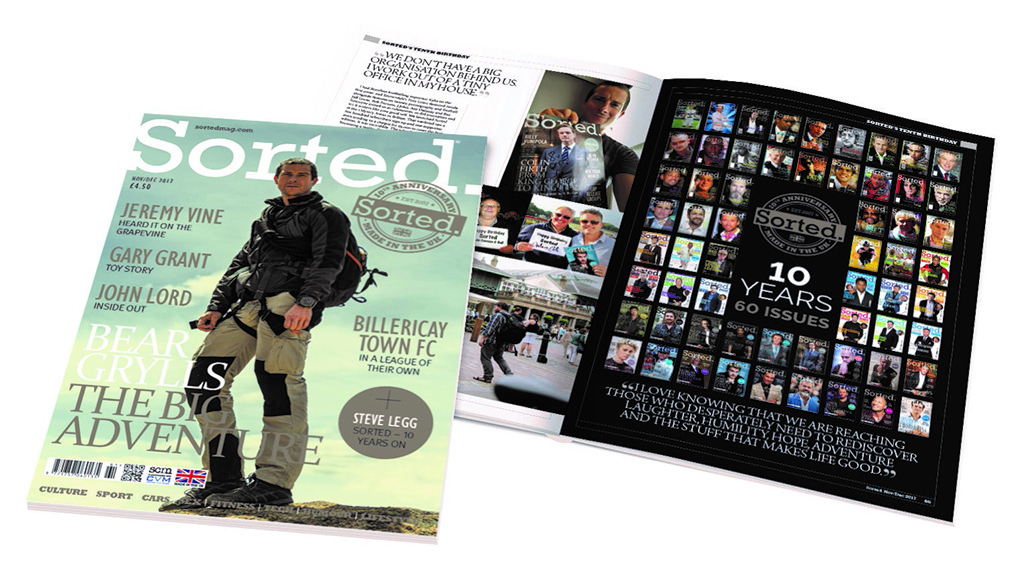 I think itâ€™s our best issue yet. We chat to Jeremy Vine and Patrick Regan who heads up XLP and weâ€™ve got an exclusive interview with the legend that is Bear Grylls, whoâ€™s been supporting Sorted since we started in 2007. The mag's full of great stuff.

Back in 2013, you climbed Kilimanjaro with Compassion, what inspired you to take up the challenge?

I hate camping but I do like a challenge so it was a no brainer when Compassion asked me to climb Kilimanjaro. It was four years ago and one of the best experiences of my life. 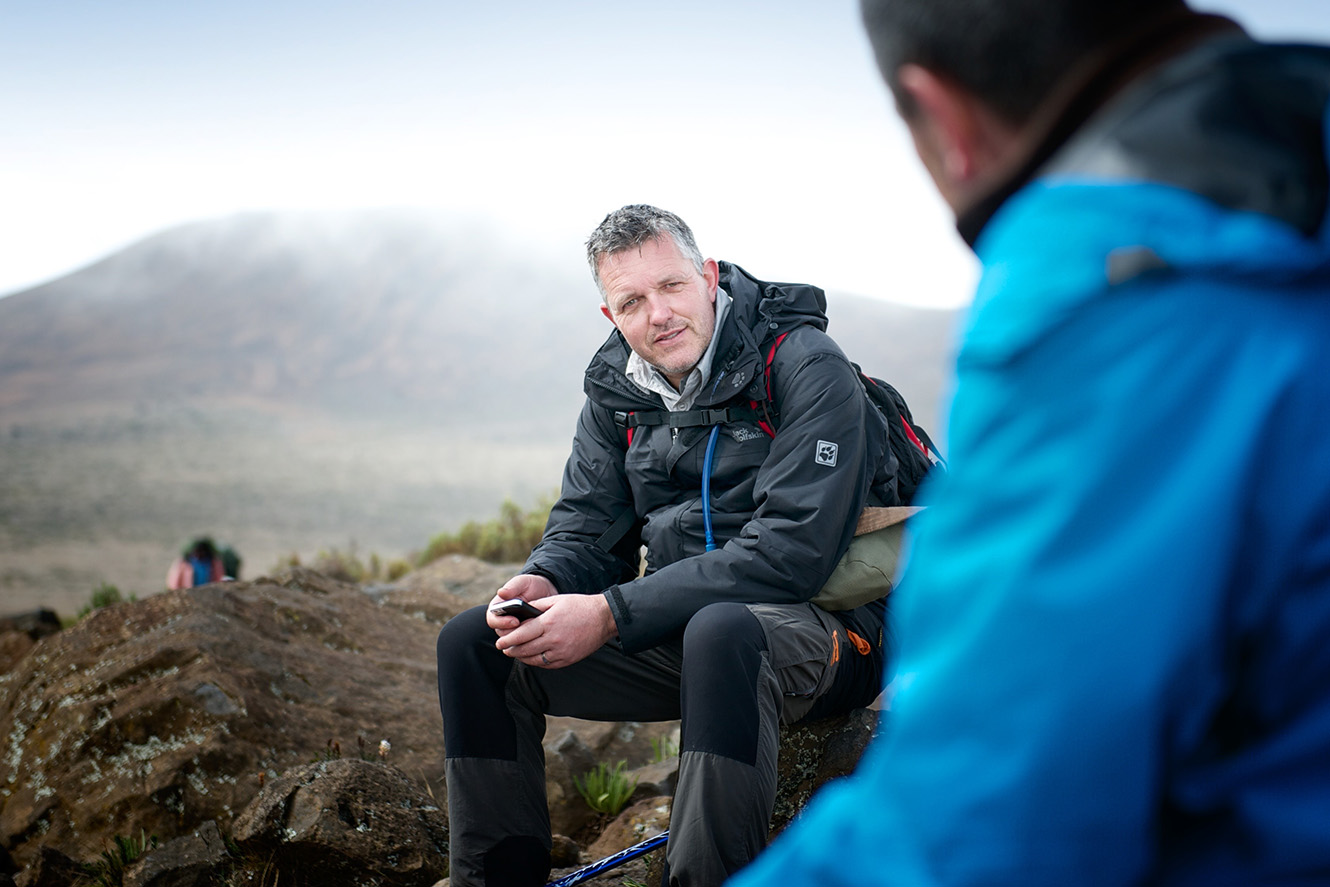 It was wonderful to visit some of the projects en-route to the big climb and I loved meeting and performing magic to hundreds of kids. The actual climb wasnâ€™t too hard for me but a number of our group suffered from the effects of altitude sickness. I dosed up on tabletsÂ  and drank gallons of ginger tea each day and managed to reach the summit without any problems.

Tell us about your Compassion-sponsored children?

We sponsor four children in total. Rehema who is 16 from Kenya, Isemanie and Pierre who are both 19-years-old and live in Haiti and then little Freddie from Uganda who is 5-years-old.

Alongside working on Sorted, youâ€™re also a well-known entertainer and comedian. Tell us about the popular Curry & Comedy tour with Compassion Ambassador Janeâ€™?

Iâ€™ve been on the road for many years doing magic and comedy and have always used the opportunity to reach out to people with the Christian message in different ways. I started using cookery demonstrations around 25 years ago in events - mainly when I was hosting daytime chat shows as part of a bigger mission and realised how well they work.

I then met Janeâ€™ inÂ Kolkata four years ago on a Compassion Ambassadors' trip. Janeâ€™ is aÂ Compassion graduate so really gets the work of Compassion and he now only lives 10 minutes away from me in Worthing, so it seemed a logical event to put together and it went from there.

So apart from Janeâ€™ demonstrating how to make a delicious, authentic Indian curry, what else can we expect from a Curry & Comedy evening?

Itâ€™s a brilliant night full of fun and laughter with an inspirational story about the power of child sponsorship. We never fail to enjoy the evening and every time we see children sponsored and released from poverty, we are truly humbled by the generosity of our audience.

Finally on the subject of comedy, we just had to ask, tell us your favourite joke!

Whatâ€™s green, fuzzy and if it fell out of a tree it would kill you? A snooker table.

Want to know more? Check out how you can host a Curry and Comedy eventÂ orÂ get adventurous with Compassion Challenges. Take aÂ listen to the new sorted podcast.

As a Guinness World Record holder for his escapology feats, Steve travels the length and breadth of the UK, as well as internationally.Â  His magic has taken him to four continents, working at the most prestigious of venues, often alongside top names in entertainment. Follow Steve on Twitter @SteveLeggUK

How completing a Compassion Challenge could change lives forever â€“ including yours.

Read an exclusive interview with Compassion Ambassador, Guvna B.

The Benefits of Exercise: Reasons To Get Active For Charity

When you have the courage to step out of your comfort zone, you can change lives.

How to teach children about poverty

How can we talk to our children about the sadness and complexities of poverty in an age-appropriate way?

Chloe Reynolds at your church!

After having toured with Anastasia and Lulu, Compassion Ambassador Chloe Reynolds is available for bookings.

Ambassador, Not on hp, Tale of two

4 stories to inspire you to get adventurous in 2018

Need some motivation to get active this January?

Meet our latest ambassador, Chloe Reynolds, and discover why she’s sponsored a child for over half her life.

Tale of Two : An Interview with Nathan Tasker

â€˜Speak up for those who cannot speak for themselves, for the rights of all who are destitute. Speak up and judge fairly; defend the rights of the poor and needy.â€™

â€˜Start children off on the way they should go, and even when they are old they will not turn from it.â€™

â€˜And whoever welcomes one such child in my name welcomes me.â€™