Period poverty is real. It robs girls of their dignity and leaves them vulnerable to sickness.

What is period poverty?

Why is period poverty such as taboo subject?

Every day, more than 800 million women between the ages of 15 and 49 are menstruating. Yet monthly menstruation is a globally stigmatised issue shrouded in silence, secrecy and shame. It’s a topic that can be embarrassing to talk about, and some cultures have developed harmful ideas and beliefs about menstruation.

Why should we care about period poverty?

The average adolescent girl will be affected by menstruation for 3,000 days in her lifetime. That works out to more than eight years!

The basics which make a period bearable – having a private place to manage it, knowing there are people to talk to who understand and having clean materials to use – aren’t a reality for girls and women living with period poverty in developing countries and here in the UK. 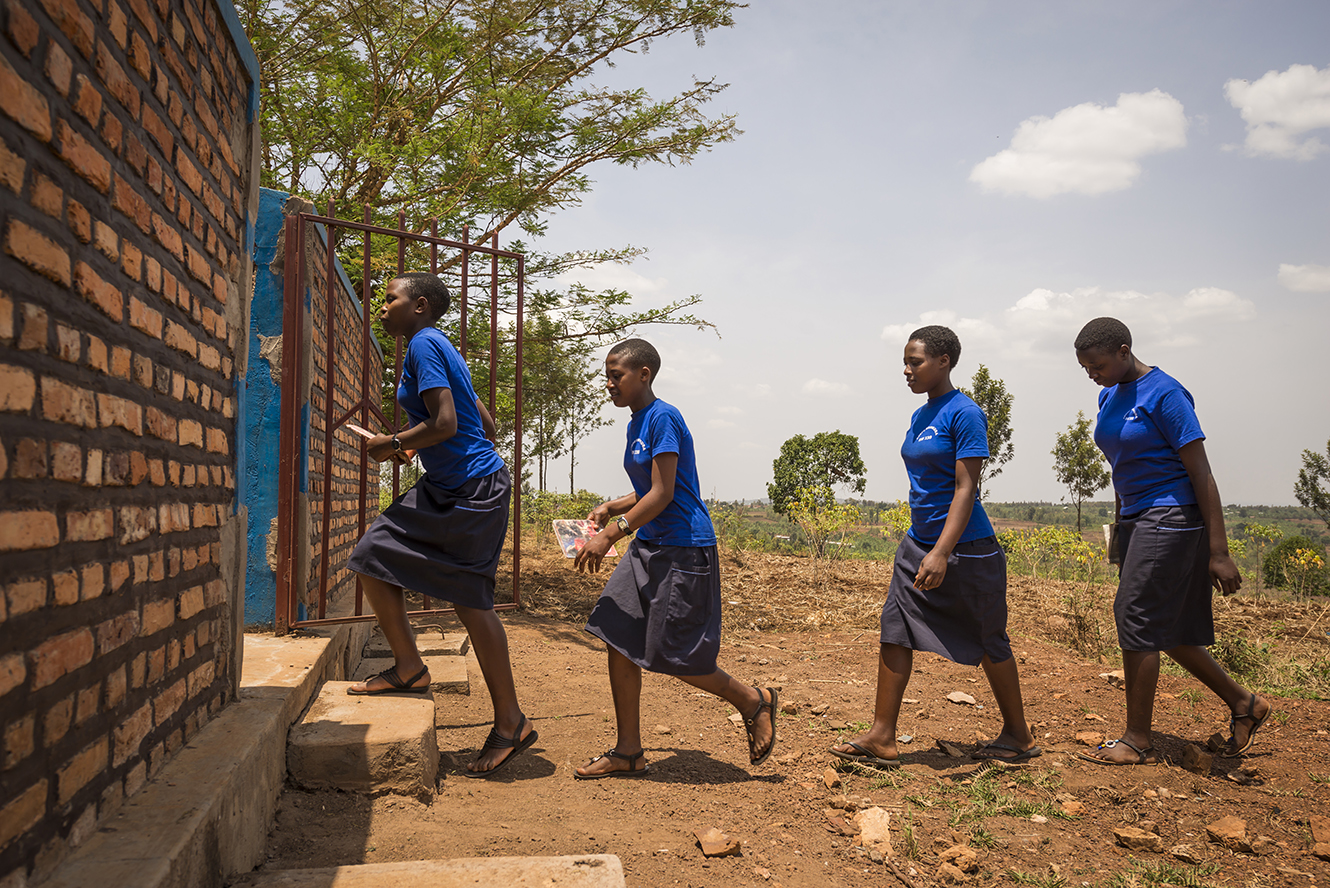 Girls are missing school due to entirely preventable reasons. The availability of good hygiene facilities in schools makes a big difference to whether or not girls attend during their periods.

If girls don’t have access to sanitary pads, they will often choose to leave school early or stay home altogether. UNICEF estimates that a shocking 1 in 10 school-age African girls ‘do not attend school during menstruation’. This puts girls at an immediate disadvantage and can lead to lower grades; some may eventually drop out of school altogether.

When a girl reaches puberty, access to a safe, private toilet can make a massive difference to her health. It’s hard for us to get our heads around when we have safe drinking water on tap, hot showers in the morning and toilets which flush. 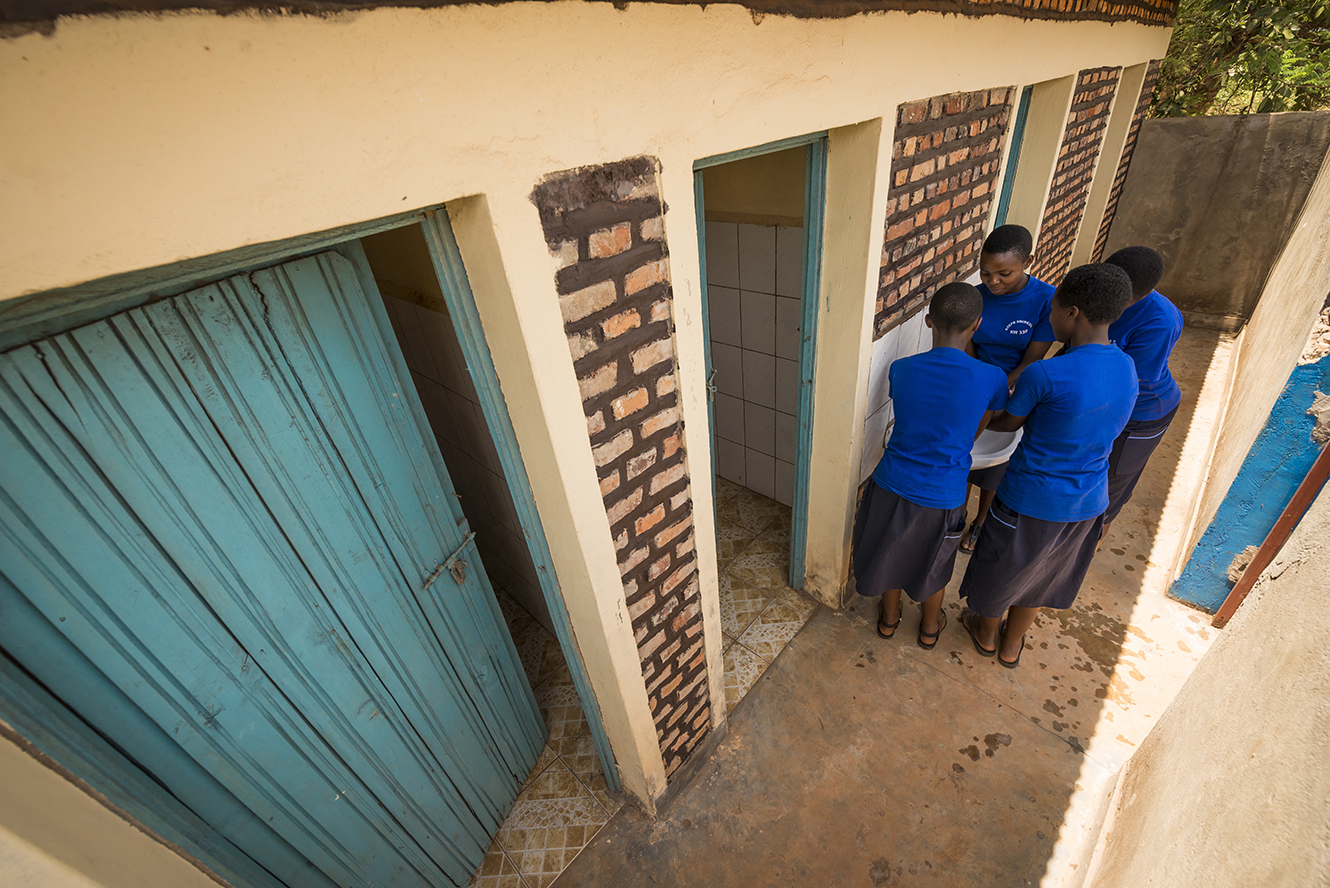 But one in three of the world’s population doesn’t have access to adequate sanitation – which means 1.25 billion women around the world do not have access to a toilet during their periods. Girls need clean water to wash themselves or their menstrual cloths and a place to dispose of their sanitary pads if they are using them.

Unfortunately, many women and girls do not have access to feminine hygiene products to use, and only 12 percent of girls and women have access to commercial sanitary products.

Stigmas and taboos around menstruation directly affect a girl’s dignity, confidence and self-esteem. Many cultures do not talk about periods openly. This means that girls often never hear of menstruation before their first period, making it a confusing and scary experience. That is the reality for an incredible 68 percent of girls in Ghana who knew nothing about menstruation when they started their periods. 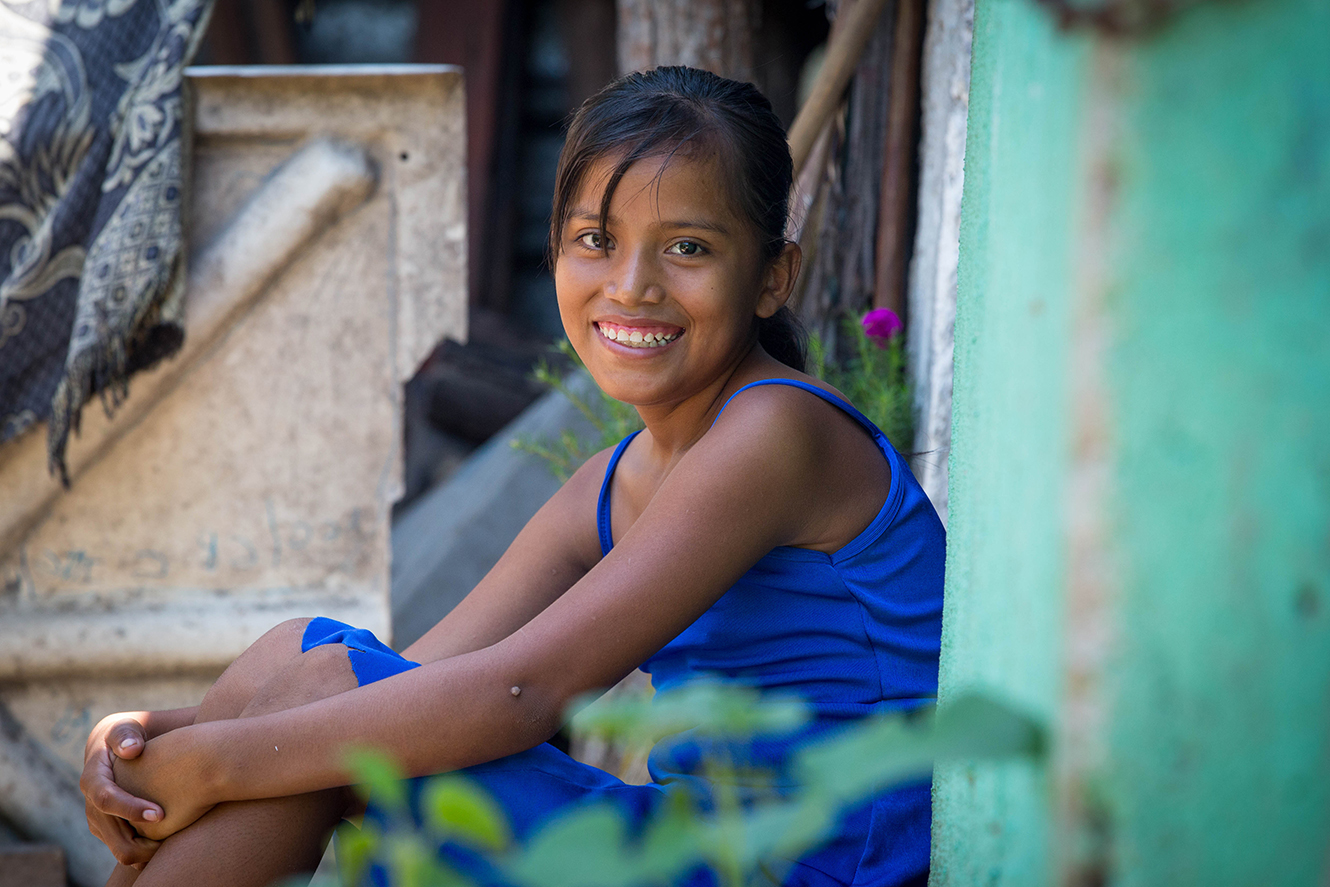 Taboos around menstruation can also mean that girls are often told they can’t do certain things during their period. The women in the semi-nomadic Maasai region of Kenya are not allowed to enter goat pens or milk cows while they menstruate. At the same time, in many Southeast Asian communities, menstruating girls are not permitted to use the same water facilities as the rest of the community. These restrictions add to the isolation, shame and loneliness of menstruation.

How is Compassion tackling period poverty?

Carol from Uganda has never forgotten the day her pad fell out in public at school.
“One day, I was walking to get food, and my pad fell out. My fellow students laughed. I was so ashamed. I ran home and got another pad. I didn’t go to school for two days. I was scared,’’ she shares.

At Compassion, we’re right with you in believing no girl should have to suffer the shame of period poverty. When we heard Carol’s story, our church partners took immediate action.

In Uganda, period poverty is a significant issue that leads to teenage girls skipping or dropping out of school, teenage pregnancy and marital conflict. A pack of seven sanitary towels cost approximately 75p, but that’s out of the reach for many families struggling to afford a daily meal. And with disposable pads containing plastics that harm the environment, a sustainable alternative needed to be found.

Meet the local church in Mulatsi, Uganda. They held a meeting where the local community identified the lack of feminine hygiene items as the biggest problem. Many of the women shared about the difficulties they faced without being able to afford pads.

One woman said, we use newspapers; another, rugs; another, cloth from old blankets; and still another said they cut off part of an old mattress. – Jacky, the Compassion project director at the Mulatsi Child Development Centre

The Mulatsi church came up with a solution – to train the local community to make re-usable sanitary towels. One set of seven towels can be made for $1.50 and will last an entire year. This provides dignity for girls and saves money, it also helps to protect the environment from the disposal of single-use plastics. Thanks to generous donations to our Health Interventions, the church received the support it needed to train the community.

The Compassion project staff trained beneficiaries and their parents on how to make sanitary towels for themselves. But they didn’t stop there. The teaching was extended to three local schools where they instructed both male and female students as well as the local village leaders and all church members in the parish. 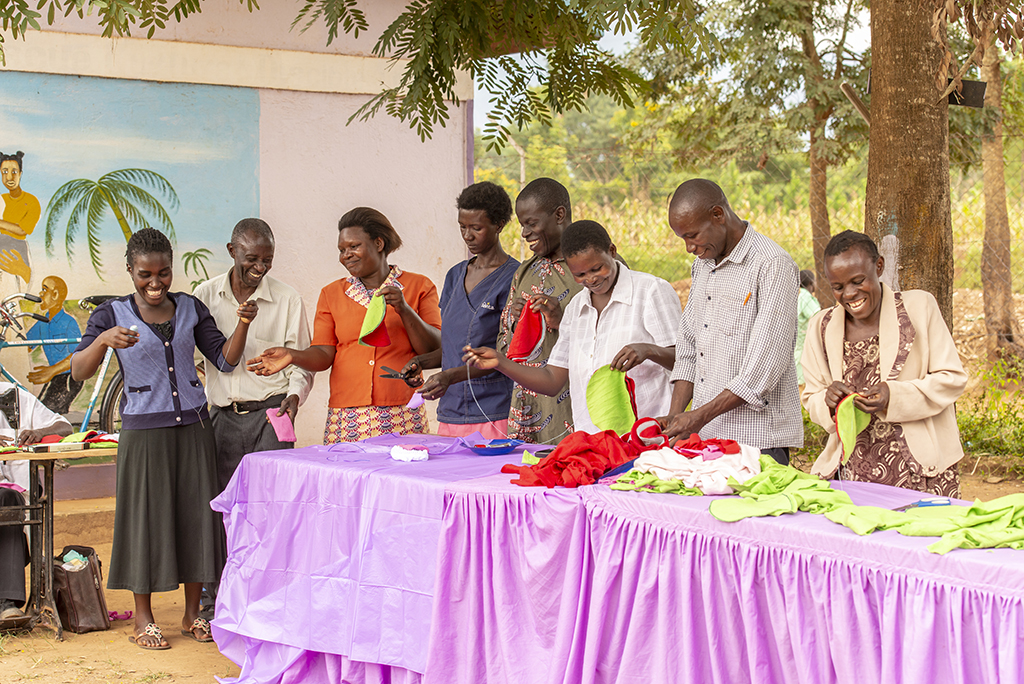 Everybody who received training was asked to train others to keep the education rippling across the region. And as a result, caregivers, including men found a new source of income. Boys and men can be important sources of support in the fight to end period poverty, but in Uganda, men often regard menstruation as a subject not to be openly discussed.

Milton, father of a Compassion-sponsored girl in Mulatsi, says, “I thought it was not proper for a girl to talk to me about sanitary towels. I have a 16-year-old; when she would come to me, I would refer her to her mother.”

But his perspective began to change due to learning how to make reusable sanitary napkins.

After the training, I realised that as a father, I should learn how to make these sanitary towels. It has also helped me because now I make them and even sell them and get money to do other things. Before I couldn’t provide them, so they would use old mattresses and fold in the cloth, but I discovered that it was unhygienic and [why] the mother often fell sick.

Milton persevered in his new business despite being looked down upon by other men. “In the beginning it was shameful before the men in the community, but to me I found it useful. But I have now educated other men. I think it was from a traditional background because our fathers would defer to the mothers but later I discovered the tradition doesn’t help,” he reflects.

Having the ability to look after your personal hygiene and health during a period shouldn’t be a privilege; it’s a fundamental human right. 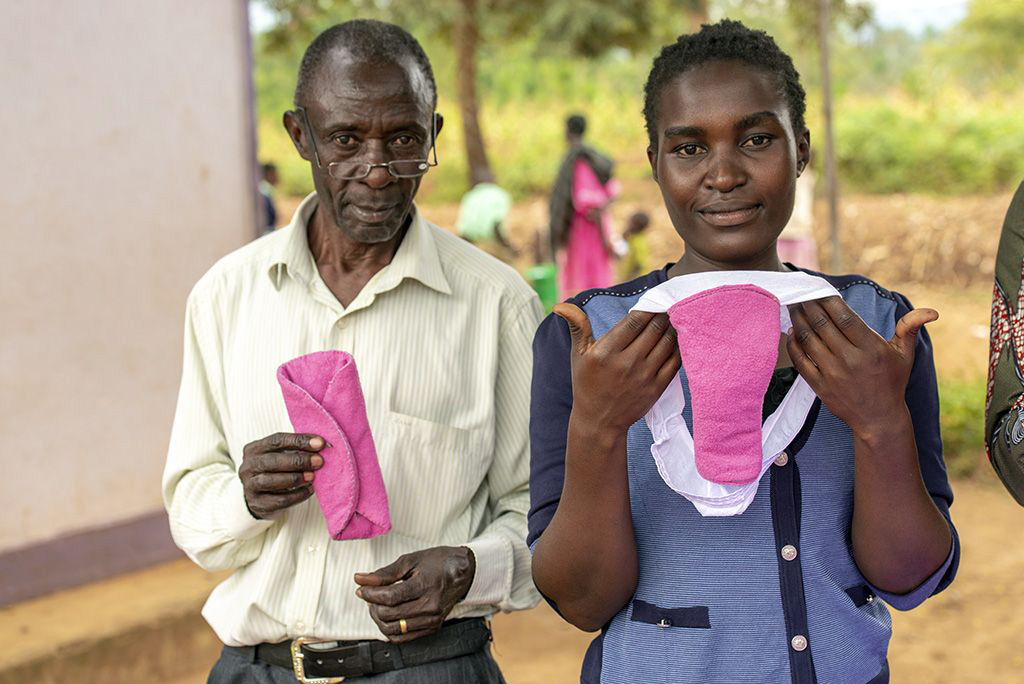 Carol is just one of the girls benefiting from Milton, the church’s and Compassion’s commitment to fighting period poverty. She no longer has to suffer shame and embarrassment.

Her story reminds us that together, we can defeat period poverty.